Huawei already sets a date for its new folding

More than two years ago we were able to test the Huawei Mate XS, the first foldable mobile huawei. Now we can officially confirm that he has a replacement or, rather, he’s about to get one. This was confirmed by Huawei itself via the Chinese social network Weibo.

It won’t really be Huawei’s second foldable, as we remember that they recently presented the Huawei P50 Pocket in a clamshell format. of that Huawei Mate Xs 2 We don’t know by heart what design it will have, but we have a hunch that it will be a book form similar to that of its predecessor and which will squarely fight with other recent devices like the Vivo X Fold.

April 28, when we will see the Huawei Mate Xs 2 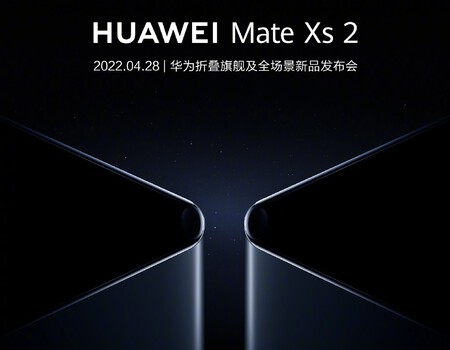 As the Huawei Mate Xs 2 promotional poster says, it will be showcased at a special event on next Thursday. According to the local time change in China, this event can be tracked at 1:00 p.m. Peninsular Europe time.

Returning to the theme of design and specifications, let’s say that the appearance of the device cannot be appreciated too much on the poster. However, it can be seen more or less clearly that it is two Mate X 2s facing each other and half folded, although it is not clear whether the device is fold or unfold.

As usual with this type of launch, Huawei does not get rid of the previous leaks. Obviously we can’t confirm anything that doesn’t come from the brand, but there are analysts like Rodent950 which predict a design similar to the first generation, with great features such as an 8-inch 120Hz foldable OLED panel, a hole in the screen for the front camera, a triple rear camera and a battery of 4 500mAh with up to 66W charging.

The striking thing about the leak is that this Huawei Mate Xs 2 would mount a Snapdragon 888 4G. And this is shocking to say the least, and not because the processor is no longer one of the best on the market, but because of the lack of 5G. In any case, we would like to point out that this is not official information.

One more unknown that wakes up this Huawei Mate Xs 2 is its availablity. We already know that these types of launches usually happen first in China and then spread to other territories. The fact that they announced it on a Chinese social network gives us the intuition that they will follow precisely this path. In any case, we will be aware of this new folding, because if it arrives in Europe it will be interesting to compare it with other competitors who are gaining strength in the field of folding.

Android drama, only 30% have installed one of the last two updates

This is how the times of Drakensang should come back

This is how the times of Drakensang should come back