Instagram is once again changing the update wall, the main section of the app where subscriber photos and videos appear. As expected, Instagram is now splitting the list between following (Following) and favorites (Favorites)– Users will be able to choose how they want to view the app. Of course: in any case, the content will appear chronologically, the most recent first.

Few apps have made users giddy as much as Instagram and everything about its main app section, the one that shows the content users are uploading. The company changed the way it presents this content based on a featured algorithm (in 2016), put its Reels, posted photos and videos of people we don’t follow

and now… it splits the stream in two to make those who don’t exclusively move through stories more dizzy. 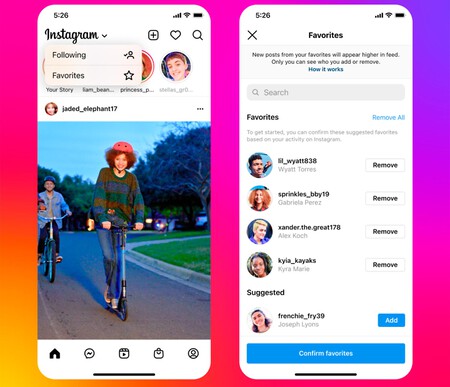 The Instagram update wall changes again with a sort of filter that aims to organize the content in two different ways: by following and by favorites. The idea is that the user has more control over what appears in the app, at least in theory.

Splitting your Instagram feed will affect how videos and photos appear in the app. This filter will be characterized by the two mentioned sections:

The big news is that Instagram is permanently abandoning the recommended algorithm: With Following and Favorites, the content will be displayed in chronological order and the most recent first. Very good news for those who don’t want the algorithm to be the one selecting the content.

To choose between either way to represent the feed, click on the Instagram logo at the top of the screen. Once the new function is activated (an arrow will appear in said logo), the application will give you the choice between Follow and Favorites after pressing.

Arcane Season 2: The Netflix Series will focus on the Vi/Caitlyn couple