Intel fights against Apple’s M1 by choosing its own benchmarks

If we thought that Intel was going to sit idly by while the media and users praised Macs with Apple Silicon, we were completely wrong. Because Intel decided to switch to barro and stain in order to reduce the surprise effect of these processors. And he did it with his own set of landmarks, carefully chosen to beat the MacBook Air and Pro with Apple’s M1.

The problem is that in many cases the comparison is questionable. And in others, it changes the processor with which it is compared in order to improve its results. Let’s see how.

Intel tests to compare its 11th generation to the M1

From PCWorld, they took up the presentation prepared by Intel where two computers are compared. In the first case, we have a MacBook Pro M1 with 16GB RAM, in the second, an unspecified PC but with an 11th generation Intel Core i7 (1185G7) and 16 GB of RAM. By not mentioning the PC model that mounts this chip and memory, replicating the tests to verify its veracity will be complicated. 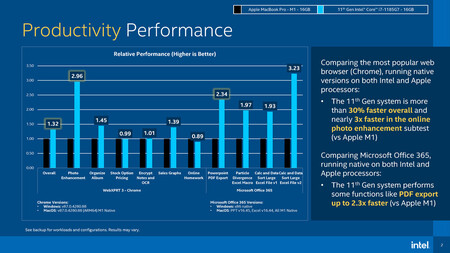 When we look at the tests, we see how Intel decided to choose to compare very specific features. Thus, for productivity tests you used Chrome and Office on both platforms and with the native versions. Intel’s processor far surpasses the performance of enhancing photos, exporting PowerPoint to PDF, and sorting large amounts of data in Excel. 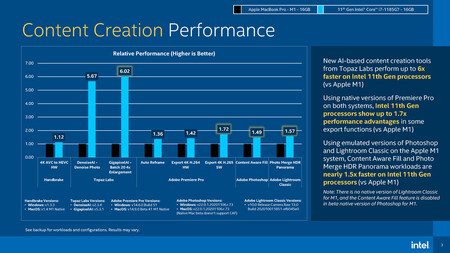 The 11th Gen Intel Core’s biggest performance surprise comes from Topaz Labs testing, where its processor is six times better than Apple’s M1. We have to state that Topaz Labs has its specifically designed apps to take advantage of Intel hardware acceleration. A point to take into account in the comparison, given that when testing on Mac with M1, applications that also make better use of its hardware are not used. In the Adobe section, it should be remembered that it is still in beta for the Mac M1 and that there are still some functions that are not even present. 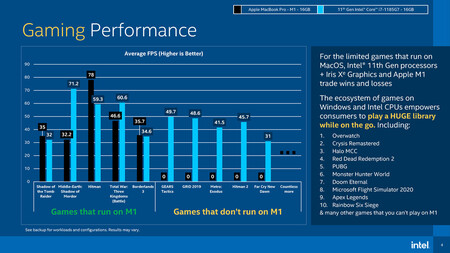 It is well known that Mac is not the ideal platform if yours is the one. the game. Many games like Shadow of the Tomb Raider are not yet ready for Apple Silicon. However, M1s score pretty well in these games which are present on the platform (with Intel indicating which ones are not). 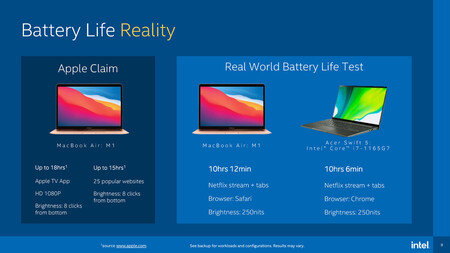 For the battery test, Intel is making a change here on both Apple’s equipment and its own. Upgrade to a MacBook Air, whose battery life is less than that of the MacBook Pro compared so far, while on the Intel side we have an Acer i7 1165G7. For the test, they use Safari and Chrome, both models with 250 nits of brightness.

The result is very similar for both teams, with just over 10 hours of battery life and the Mac slightly ahead. The point is that Intel chose the Mac with the M1 with less battery life for the test, use Safari to display a diffusion from Netflix to the Apple TV app, where Apple claims that 18 hours are obtained (the test with 250 nits probably less hours, but more than these 10). 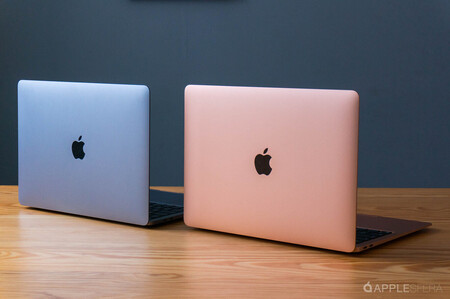 In general, these types of statements need to be corroborated by users and the trade press in actual use situations. While the Mac M1 They received Comments

very good in all these sections, there are not yet enough models with these processors to compare them in the real world.

It is also striking that when there are applications or functions that make better use of the processors from the Santa Clara firm, they do not do the same in the case of Apple’s M1s. This happens when you are using Chrome instead of Safari, Safari and not the Apple TV app or use the Adobe suite, which is still in beta and has features that are not even enabled. Not to mention the model change for the battery test, using the one with the least battery life in the case of the Mac.

Intel finds itself at a delicate point in its history, with a transition to a new CEO in the works, chip design and manufacturing issues, and large customers like Apple creating their own solutions.

It is interesting to see that, on this last point, Intel doesn’t mention the lack of a fan on the MacBook Air at all (as well as the quiet operation of the MacBook Pro). A point to be taken into account but which is not relevant in the manufacturer’s tests.

Every manufacturer has the right to compare what stands out the most. But you should also be aware that your complaints must be well established. Otherwise, when they reach the hands of users and specialized media, they can bring out the colors.