While it has been in operation for a long time, it wasn’t until last summer, with half the planet suffering from different mobility restrictions and confinements, when ClubHouse has become a real heavyweight in live audio. All this without being present on Android, only with its application for the Apple ecosystem.

Since then, the social network of audio rooms has gained ground and its competitors are presenting changes to their current services, even direct alternatives like Facebook Hotline, to catch up. The last step is again with Facebook, which edit Instagram live streams to allow video to be disconnected

and convert them into voice rooms, which was already in the testing phase.

Live video broadcasts have been active on Instagram for a long time, known as “ Live Rooms ”, allow us to interact with our subscribers via video and we can even add other participants to the call, thus having conversations that all of our subscribers can listen to for the moment, or later if we want to store them.

We can now broadcast live on Instagram by disconnecting the video

Facebook adds an extra touch to Instagram’s “ live rooms ” and incorporates the ability to disconnect video from these rooms, turning them into audio-only rooms. To do it we just have to press the camera button on the right side of the room live to disconnect it and we’ll convert it to “audio only”. And in addition, we can invite three other users to join the broadcast with us.

live while others attend the meeting. And if you’re wondering if you can do something with that audio to, say, turn it into a podcast, the answer is yes. Facebook also allows recording of audio from these live audio rooms, so we can export it later and edit it as we see fit. 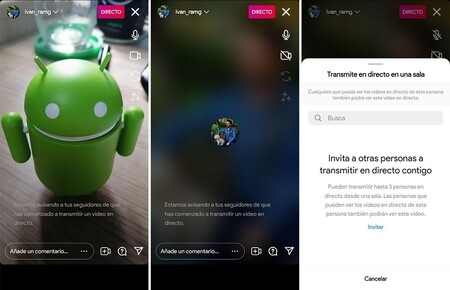 The audio rooms on Instagram already seem to have been massively released for all users of the network, even anticipating the changes proposed by Facebook for its own social network in the same direction. Therefore, It looks like you can already stream live audio for your subscribers and organize conferences, live concerts or whatever you can imagine.

All Apple devices due to launch in 2021

All Apple devices due to launch in 2021