Along with the beta 2 of iOS 15, launched yesterday at the last minute, Apple has also deployed those of other operating systems. WatchOS 8 Second Beta Introduces New Portraits Watch Face, which promises to give our best photos a new look. We have already tried it and these are its possibilities.

Sphere Portraits: a breath of fresh air for your best photos

Display your favorite portraits on an Apple Watch face. The portraits are cropped to focus on the people who compose them, to adapt to the screen and to blend in with time. You can choose from three different styles and a maximum of 24 photos. A new photo will appear every time you raise your wrist or touch the screen.

This is how Apple describes this new watchOS 8 portrait sphere. As indicated, only photos taken in portrait mode can be chosen, no matter if people or objects appear in them (although the ideal is for people to be seen). You can place up to two complications, one above the time showing only the date (or nothing) and the other at the bottom.

We can choose up to 24 photos which will rotate as we use the watch throughout the day. If we turn the digital crown, we’ll see how the subject of the photo approaches in an animation that separates it from the background. Kind of like when you turn your wrist and the screen turns on or off.

On an Apple Watch Series 5 and later, the dial remains much darker, with the hour digits “hollow”. The time position will be up or down depending on where the subject is

, so as not to obstruct the photo. Finally, we have the choice between three styles: classic, modern and rounded.

Photos is the most popular face of the Apple Watch 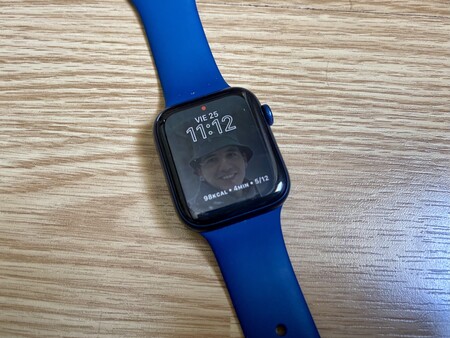 This is what the face of WatchOS 8 Portraits looks like when idle on an Apple Watch Series 6.

During the last WWDC 2021, Kevin Lynch, head of development for watchOS 8, said Photos is the most popular face of the Apple Watch. He described it as a way to stay connected

with the people who matter most to us. That’s why they decided to create a new sphere that brings together the best photos of people.

The choice of these photos is not without reason. By itself, portrait mode is used especially with people’s faces. Thus, with them, Apple makes sure that the user will choose the most suitable for the sphere.

Of course, it is striking how the integration between the Apple Watch and the iPhone gave birth to this sphere. Photos taken in portrait mode With an iPhone, which captures depth of field, it makes it possible to distinguish the subject from the background. And thus, create the visual effect that makes you stand out when you turn your wrist or move the digital crown.

It is curious to know how this sphere is used the most by users. It barely incorporates complications and display only the maximum date and time. Until now, I thought that the dials that most closely resemble a traditional watch or that offer more features like Siri would occupy this privileged place.

Xbox One and Series X | S

Xbox One and Series X | S