now they are easier to use

Google continues to promote the use of YouTube. Over the past few weeks we’ve seen some changes, the most recent being the one that allowed preview with sound in windows. Now it’s the turn of improve playlists that we create on YouTube.

Android TV receives a change in the interface of the YouTube application, more precisely in that related to playlists. A new design that makes them much more usable

by adding an interface with clearer and more transparent controls.

It’s a change that comes with YouTube version 2.15.498 for Android TV or Google TV. At the time of writing the news I tested on two models, a TV with Android TV and a Chromecast with Google TV and I still have version 2.15.006, so the change has not yet been taken into account.

In 9to5Google, they echoed a change that is now starting to hit more users. Playlists now have a new interface that displays the name of the playlist as well as the buttons on the left. “Play all”, “Loop” and “Save to library”. The right part of the screen is reserved for video thumbnails. 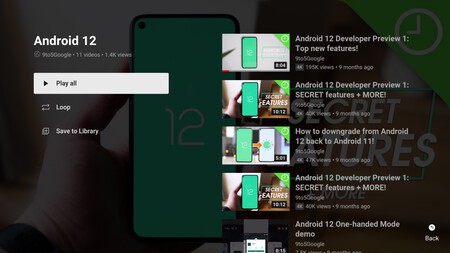 Until now, when entering a YouTube playlist, a window would open in which miniatures took up all the space while a button in the upper right area allowed to “play all” the content. This disappears with the new interface.

The new interface design in playlists deploys to Android TV and Google TV devices With the latest update of the YouTube app, version 2.15.498. Also, it looks like this is an update that needs to be activated from the server, so there is nothing we can do to force it.