Qualcomm confirms which processors will support Wear OS 3.0, but Google is unsure if they will update watches

At the end of this year, the most significant update to Wear in years will hit the handheld market. Google Yes Samsung, resurfacing as new unified platform which will offer the best of Wear OS and Tizen in a single operating system.

The launch of this new version which will be released by the new Samsung Galaxy Watch 4 it is quite a mystery. We still don’t know if Wear OS 3.0 will strike existing watches. No manufacturer has confirmed whether they will update their watches to the new version, but what we already know are the Qualcomm processors

compatible with the new Wear OS.

A spokesperson for Qualcomm confirmed that they are working with Google to bring Wear OS 3.0 to the Snapdragon Wear 3100 and Snapdragon Wear 4100/4100 + platforms, but they didn’t want to give more details just yet. 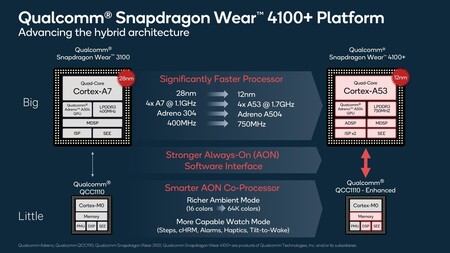 That would mean Qualcomm wouldn’t have to release a new processor to support Wear OS 3.0. Processors released in the past three years would be compatible with the new version, which this would open the door to updates to current clocks.

But that door was open for a very short time, since at the time of Qualcomm’s statements, ** a Google spokesperson clarified that: **

“User experience is a priority for us. We haven’t confirmed the eligibility or timeline for whether any Wear OS smartwatches will be upgraded to the new unified platform. There are many technical requirements to run the unified platform which ensures that all components of the user experience are optimized. ”

Therefore, that our watch has a processor supported by the new Wear OS 3.0 would not be sufficient to receive the update, it looks like there will be more technical details. Manufacturers such as Fossil or Mobvoi have reported that Google has not yet informed them if they will be able to update their current models. We’ll have to wait until the end of the year to find out whether the current Wear OS hitting the market, like the new TicWatch E3, will be updated or not, and why. It doesn’t make much sense to launch Wear OS watches now that they won’t be updating in a few months.

Video collects all the objects that neighbors but not us may have in Animal Crossing: New Horizons – iGamesNews

Video collects all the objects that neighbors but not us may have in Animal Crossing: New Horizons - iGamesNews