Like every three months, Apple has published its latest financial results, this time those corresponding to the fourth fiscal quarter of 2021, which covers activity between June 26 and September 25. Unlike 2020, which was late in the launch schedule due to the pandemic, this quarter it included the initial sales of the new iPhonesThis is not the case with those of the Apple Watch Series 7, which was announced without a specific release date.

This quarter Apple entered $ 83.360 million, nearly half of which (46.6%) comes from iPhone sales, a percentage that has been declining in recent years. Particularly over the past year, the contribution from the rest of the divisions has been widely distributed, but the main pillar of growth continues to be the Services division, which includes revenue from the App Store, iCloud, Apple Care, Apple Music, Apple TV +, etc … It is already close to assuming one in four dollars entered by Apple. 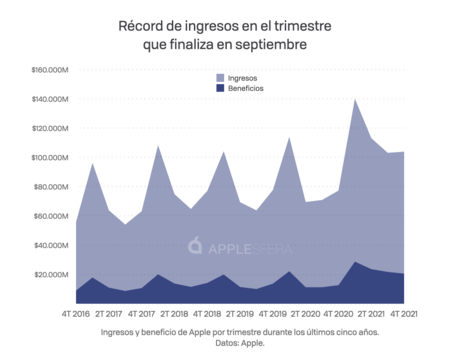 This turnover represents a growth of 29% compared to the same quarter of the previous year and of course represents a record in this interval, even if Cook noted that he did not live up to expectations, since the logistical problems assumed $ 6,000 million less in the balance. If this had not happened, these revenues would have further shattered the previous record, touching the $ 90,000 million entered.

“Our record September quarter results closed a remarkable fiscal year of strong double-digit growth, in which we set new revenue records in all of our geographies and product categories despite continued uncertainty in the environment. macro, ”said Luca Maestri, chief financial officer of Apple. officer, referring to the flea shortage that threatens to worsen.

Apple’s net margin in the last quarter reached $ 20,551 million, which is 24.6% of its revenue. This figure is important because with it Apple is taking a new step: the average of its net margin over the last four quarters is above 25%, which is unprecedented in the company, which in recent years used to move between 18% and 24% at peak times. 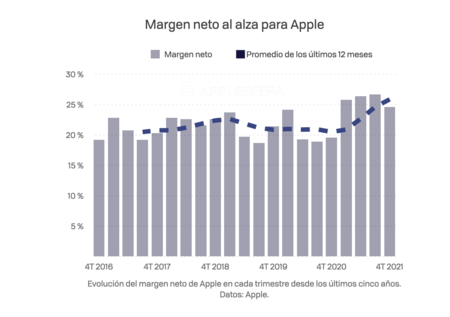 The rise of services, which leave a greater margin than the sale of physical devices; or the switch to Apple Silicon to replace Intel processors may be part of the explanation for this rebound in net margin, which began a year ago, in addition to internal factors. A detail commented by Apple: the last five quarters of the Mac have been the best in its history

in terms of income generated. A step marked by the M1 chip and more specifically the MacBook Air, which Apple has particularly pointed out as the main responsible for this growth.

On another side, IPhone continues to climb downward in importance to Apple’s revenue. After peaking with the iPhone 6s and 6s between 2015 and 2016, reaching peaks of up to 70% of company revenue, in this last quarter it has remained at just under 47%, even s ‘It is true that it is in this quarter where it achieves less sales, because the next generation is about to be introduced. 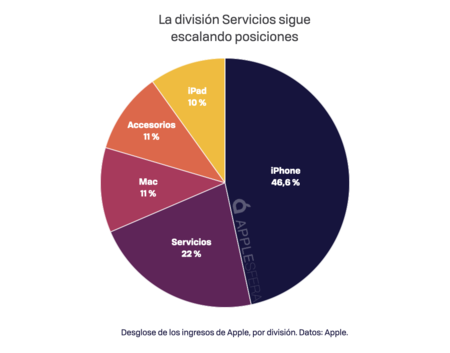 Services, Apple’s canon that helps drive more revenue per customer once iPhone sales peak, continue to gain in importance to the company. They already represent 22% of its revenues, and also, with a higher net margin than the rest of the divisions. 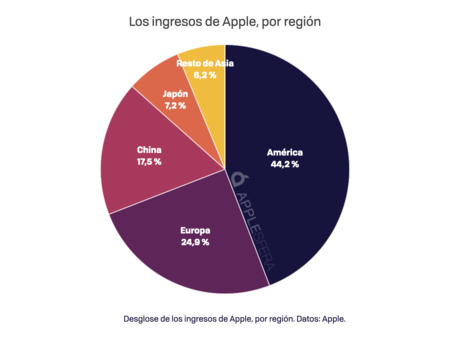 Regarding the regional distribution, it is striking the increase of America (North, Central and South) in terms of percentage of income, to the detriment in particular of China and Japan, which had a greater weight in this distribution in previous quarters. In this regard, Tim Cook said on the subsequent call with investors that a third of Apple’s revenue comes from emerging markets. The CEO explained that India and Vietnam are markets in which the company has doubled its business volume.

Looking ahead to the next quarter, marked by the sale of the first computers equipped with the M1 Pro and M1 Max chips as well as the best quarter in history for iPhone sales, we can expect some turbulence due to the shortage of aforementioned chips. the whole tech industry (and so many others) in check and that in just a few months we will be able to find out how it has splashed the manufacturers of Apple’s stature.

For now, Apple has preferred not to give precise forecasts for this next quarter due to the uncertainty. generated by the blows of the pandemic, global logistics issues and the aforementioned shortage of chips. He predicted that the three-month revenue loss could be more than $ 6 billion today, although they still expect a “very strong” business performance in the pre-Christmas quarter.

These results caused Apple’s stock to fall about 3.6% in post-trade negotiations. At this close, the title had increased by 2.5% compared to the previous closing, that of Wednesday evening.

Portal has options that would have been mods earlier

Portal has options that would have been mods earlier