Samsung Galaxy S10 is updated to One UI 3.0 and Android 11 in Europe

One UI 3.0 is a remarkable advancement for all updating Samsung Galaxy as it not only includes new functions and renewed aesthetics, Android 11 is also under the software hood. Th is implies a additional system optimization, notification bubbles, smart responses

and some improvement in energy consumption. And all these advantages are already reaching the top of the Samsung catalog. 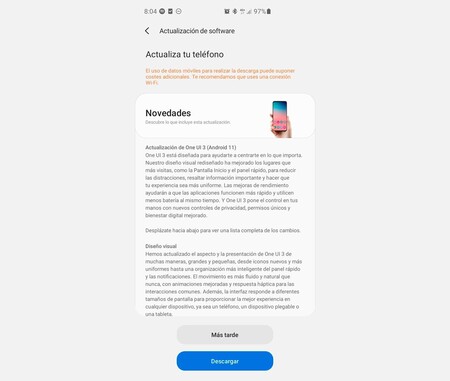 As Samsung has indicated on its update schedule, January is the month in which Samsung Galaxy S10 receives new software versions, both layer and system. At the start of the year, the update was observed in Switzerland; now it has also spread to Europe.

As Spanish users in the Samsung community show, One UI 3.0 and Android 11 are coming as an update to the Samsung Galaxy S10, both free and Vodafone. The update weighs around 1.8 GB, includes january security patch

and renew both the diaper and the system. The changes themselves are not overdone, but they are noticeable.

To find a new update in Samsung Galaxy S10 you need to go to phone settings and go down to ‘Software update‘; Then you need to click on “ Download and Install ” for the Samsung Galaxy to check for updates. If the last one has already arrived, it will be enough to install it to take advantage of all the news.

Samsung Galaxy S10 is updated to One UI 3.0 and Android 11 in Europe