Your mobile is not compatible with Fortnite and the direct installation via the APK does not work for you either? Not enough power to run the graphically demanding game? Well, there is a very easy way to play fortnite on almost any android: GeForce Now streaming. We tell you how to take advantage of Nvidia’s gaming platform.

The story of Fortnite on Android spans different chapters with twists as sudden as a Turkish soap opera. First it landed exclusively in Samsung’s Galaxy Store and then it jumped to the rest of the mobile phones in beta and with APK Epic itself decided to include its game in the Play Store and after the inserting a purchase link other than Google, it kicked Fortnite out of the Android store (just like Apple did in the App Store). This does not mean that Android users have lost access to the game. There are even more options than the download itself.

Fortnite without installation, on almost all Androids and free 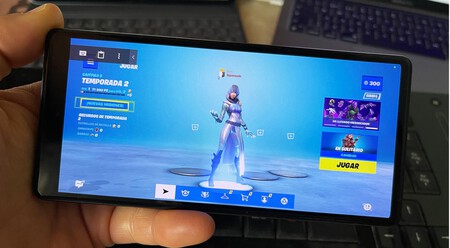 Nvidia announced yesterday May 19 the availability of Fortnite Touch for mobile phones, a streaming version of the famous game that offers virtual on-screen controls to easily manage the action without using controls or a keyboard / mouse. We tested this Fortnite in our GeForce Now account and the truth is that its performances are of an excellent level.

Since the game is streaming, using GeForce Now to run Fortnite has its pros and cons. Among the first is the fact that don’t have to download the game (notable savings in storage), which is used for less powerful mobiles and the graphics are at a very high level (they run on computers with Nvidia graphics). On the downside, to play Fortnite in streaming you need a connection, consumes a lot of data (important on mobile connections) and an Nvidia account is required.

Once the premises are on the table, let’s see how to make Fortnite work on your Android.

With GeForce Now, you’ll have access to the same Fortnite account you use on the rest of your devices; with the same skins, levels and V-Bucks purchased. You can play whatever you want as long as you have an internet connection and the hours of continuous play offered by your Nvidia subscription.

With GeForce Now you save several GB of occupied space on your phone, as well as the heating necessary to run a game with such graphics demand. Of course, streaming has some implicit disadvantages: you need a stable internet connection and there may still be some latency between pressing the (virtual) buttons and the on-screen execution of the action.

We tested the new version of Fortnite for mobile phones and the truth is that the sensations were very close to the experience with the game installed. Immediate response, very high quality graphics, the touch controls adapt well to the screen and, in general, it’s worth having GeForce Now handy if the mobile can’t physically handle it. In case your mobile allows the installation of Fortnite, our recommendation is to use this method before streaming.