One of the best things Android has had since its inception is its customization capabilities. With the right apps, you can do almost anything on the system. And that’s almost literally all if you enter the land of root. And among the many customization options, we’ve always had keyboards for every taste.

Specific keyboards for emojis, keyboards with applicable themes, compact keyboards, floating keyboards. Almost all. And I, many years ago, found the right one for me. The one who liberated writing with sliding and who became for me the only and indisputable. The “problem” with him is that he is dead. Quote “problem” because I paid for it, and therefore I still have it on my Google Play. I’m talking, of course, about Swype.

The Android keyboard I feel at home with

I can and do promise that I’ve tried Android keyboards to annoy most geeks on this subject, and I’ve even bought a lot of them. But none like Swype. Imagine what body I had left when, in February 2018, it was announced that the development team was leaving the project and it was left on Github for whoever wanted to continue it. Washed up on the beach with no one to throw a bucket of water on him.

Swype started it all with a swipe, and it’s fair to say. Until then, I had never felt comfortable with full keyboards. I really missed the T9 in my Nokia N81, the last phone I owned before switching to Android with the HTC Hero, and the touchpads just didn’t feel like it. But with Swype I regained my ease in typingAnd with it hope.

After Swype came others such as ‘Flow’ which were added to Swiftkey seeing that the former’s model prevailed. Gboard also decided to allow swipe input, and later it came to other keyboards available in the Google store. But none, and th is is a strictly personal opinion, like Swype. So the first time I changed my phone after he died, what I suffered the most was because I was going to lose Swype.

But what was my surprise when in apps restore Google Play reinstalled it for me. And it worked like day one, albeit with some downsides, like losing sync through the cloud. So with each reinstallation, my dictionary of words disappeared. Every fucking time. But still, it caught up with me. 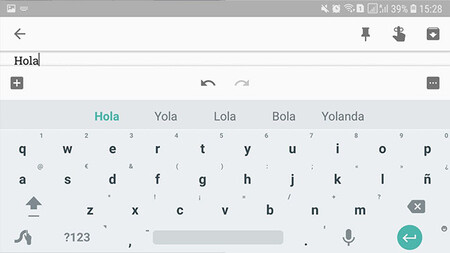 However, it looks like the light in the tunnel is starting to dim and it will soon be completely dark. One of the problems with Swype is that it is in English when installed and you have to download the Spanish language to change it to your native language. This download is done from the cloud, and lately he’s given me quite a few failures

. A few days ago, in fact, I tried to install Swype on my wife’s mobile, using my Google Play account, and I couldn’t bring up the list of languages.

On my last mobile changes I had similar failures, although I finally managed to let myself download the language. But all this indicates one thing, that this part of the installation, which is essential to continue using Swype if you are neither an English speaker nor an ‘English writer’ (sorry), can also die at any moment. Then I’ll probably have to switch to Swiftkey or Gboard. But as I already told you, with none I had the same sensations as with Swype.

And it’s the sad story of an incumbent Android user who feels infinitely more comfortable with an officially dead third-party keyboard. More than four years have passed now and I haven’t found a replacement yet. What can we do.

Playstation Plus: New subscription model from today also in Germany

Playstation Plus: New subscription model from today also in Germany