the first shows Google in real photos and without secrets

After years of rumors of a Google Watch based on its smartwatch operating system, Wear OS, the next Google I/O looks like we’ll finally see this device materialize. Because we already know what the future Pixel Watch looks like in all the details: the latest photos from all angles they show a smartwatch with a new design and with an exclusive hook-and-loop strap.

It’s not that Android was born within Google since this company bought the operating system from Andy Rubin, Rich Miner, Nick Sears and Chris White in 2005. From then on, Google developed Android until that we know today; divide said development into adapt the peculiarities of the system to very specific devices

, often creating a device that serves as a guide. In Wear OS, none existed yet; deficiency which should soon be resolved.

Clean faceplate, bezel-less, with control crown and quite thick 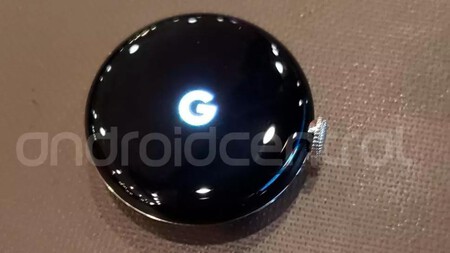 We had already physically seen the Google Pixel Watch with a first front photo which provided for a sleek design for the watch. No bezel, with curved edges and well-hidden light sensors around the panel. In the new photos that have been leaked, there’s no reason to add more imagination: the Pixel Watch has almost no more secrets.

Android Central is the one who got the Google Pixel Watch photos through one of its readers. With its progress, we can learn more about the clean design that Google applied to its first watch, as well as the curious hooking system with which it plans to anchor the bracelets to the dial.

for the pictures, anchoring is done by pressure; hold the two parts together in a seemingly secure way thanks to certain clips on the ends (this will make it difficult to purchase unofficial straps).

The Google Pixel Watch looks a bit thicker than usual for a smartwatch. Round dial, metal body, the inner face houses the sensors of the device (probably heart rate and SpO2; it’s likely to include skin temperature measurement), all indications are that it will be charged using a wireless charging base (hopefully Qi) and will offer two physical elements: the crown (with push button) and a second button to manage the operating system.

We don’t know any more specific details, it’s speculated that the Pixel Watch will be sold in WiFi-only versions and with mobile connectivity; It would be available in three different colors: gray, black and gold; It would have a capacity of 32 GB and would be released with Wear OS 3.1. Given the level of detail in the leaks, the most logical thing would be for Google to unveil the Pixel Watch during the Google I/O keynote, an event that will take place on May 11. The new hardware should be accompanied by a major software revision.

On May 11, the Bethesda launcher will be taken offline