With the Xiaomi 12 and Xiaomi 12 Pro already on the market for months and with many rumors pointing to new “S” series smartphonesthe Chinese company has already confirmed when it will officially present them.

We know for sure that they will be Xiaomi 12S according to the poster with which they were announced and, given the leaks, there will be more models outside the norm, adding a ‘Pro’ and an ‘Ultra ‘ version. All three would come with cameras designed with Leica

in what will be a historic collaboration between the two companies.

Date and how to follow the Xiaomi 12S event 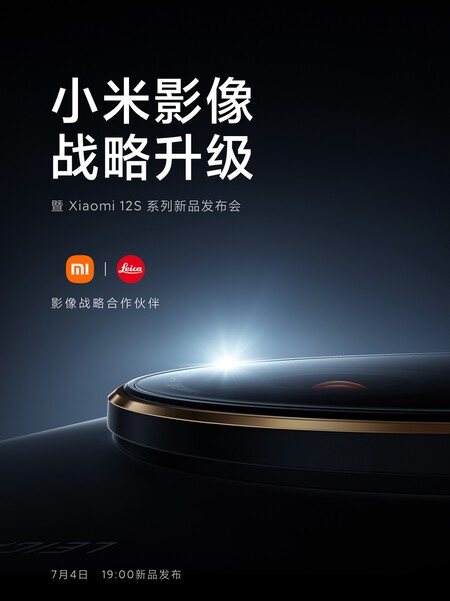 As confirmed by the Xiaomi event poster, the event will take place on next Tuesday July 4 at 1:00 p.m. (Spanish peninsula time). The description of this, in its Spanish translation, tells us that it is a “Strategic update of Xiaomi’s photographic technology”, revealing part of the camera of one of the Xiaomi 12S.

This event is not global, at least initially, since it seems to be oriented towards the Chinese market. However, and even more so considering the category of mobile phones that will be presented, it is more than foreseeable that what is advertised ends up reaching more markets

including that of our country.

These will be the three new Xiaomi smartphones

As we have seen through leaks, the Xiaomi 12S will not reserve anything in terms of power. Two of them, presumably the Xiaomi 12S Pro and 12S Ultra, would mount the recent Snapgragon 8+ Gen 1 as the main engine, namely the best Qualcomm chip today

For the standard model, the “pure” Xiaomi 12S, we would find a Mediatek chip which could be the Dimensity 9000 or the Dimensity 9000+, which was presented just a few days ago and which would be comparable to the aforementioned Qualcomm chip.

With chips of this caliber, one would expect the rest of the hardware to be consistent with those that they will probably be the best Xiaomi phones in 2022. Especially in the field of cameras, which is the best kept secret of the company and which precisely serves as bait for this event, of which we will be very aware to be able to know and bring you all the details.

The iPhone 14s are already on the way: they are starting to send components

Here's how AMD powers its RDNA 3 graphics for Ray Tracing