the OPPO Pad will mount the Snapdragon 870 and 6 GB of RAM, according to the latest leak

2021 has been a good year for the tablet segment. In addition to seeing the launch of a version of Android for larger screens, Android 12L, we saw the arrival of Realme’s first tablet, the Realme Pad, and the return of Xiaomi, Nokia and Motorola to this Marlet. Even Google patented a proposal.

Now everything indicates that another manufacturer is about to debut in this segment. It is about OPPO which, after presenting its first folding, is already working on its first tablet. The OPPO Pad – as they call it – has not only already obtained 3C certification, but has also been seen on Geekbench ahead of some of its features.

Last August, Digital Chat Station shared on Weibo an image of the possible OPPO Pad and some of its features, such as The ColorOS operating system for Pad. In the post, he talked about looking very similar to the Huawei MatePad Pro 12.6 with very tight bezels and the front camera in the same position.

A few days ago, an OPPO tablet got 3C certification in advance which will support 33W fast charging. Now, the OPD2101 model has appeared in the Geekbench 4 database showing, once again, that it will include Qualcomm’s Snapdragon 870 processor with a speed that reaches 3.19 GHz. 6 GB of RAM and the Android 11 operating system. 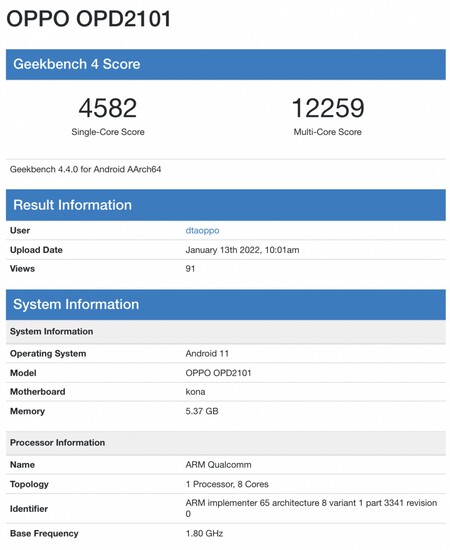 Although it was initially assumed that the first OPPO tablet could be presented in the second half of 2022, everything indicates that we will see it in the first trimester. It is even possible that it will see the light of day with OPPO’s new flagship, the future OPPO Find X5 Pro, which has also received leaks in recent days.