We only have a few hours left to know in detail all that Xiaomi can offer with the new Redmi Note11 range. We have known a good part of its specifications and we even have the official images. Information to which is added an image that shows how the new phone will feature JBL sound.

Xiaomi seems to want to take care of an aspect like sound, in its new phone. And in this model the brand takes the plunge and stop using Harman Kardon signed audio used on other models

, a company owned by Samsung, to make the jump to JBL in the form of two balanced stereo speakers. 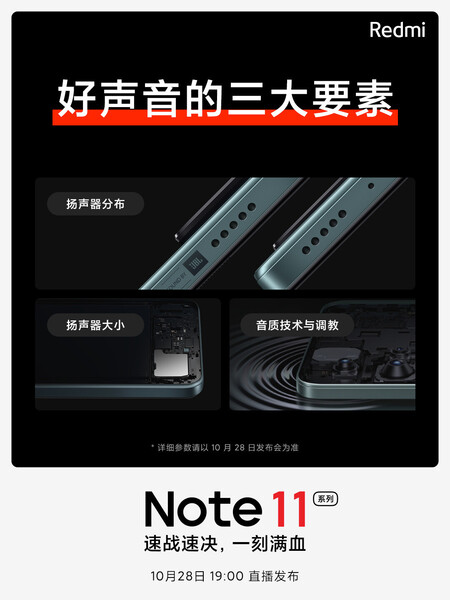 This is shown in the last filtered image where we can see how the Redmi Note 11 is equipped with balanced stereo speakers signed JBL. In the absence of tests, it is to be expected that the symmetry of the two components, which have the same number of openings in the frame, ensure better sound distribution.

The speaker has a diaphragm that can be up to 0.65mm wide to gain volume and reduce distortion. A dual speaker that seeks to enhance the experience

when you consume media content or play video games. The new JBL speakers will support Dolby Atmos object-based sound, allowing better use of content with support for this audio system.

The two speakers are housed in opposite areas. One in the upper part of the mobile and another in the lower area next to the charging port and the headphone jack so that the feeling of stereo sound is facilitated. These two speakers are independent of the call speaker, which is the one used by other manufacturers to achieve stereo sound.

We’ll have to wait until tomorrow, October 28 **, for the rest of the details of the new Xiaomi phone line.