This application brings you the “It rings” of the Pixel on any mobile with Android 12, without root

Google Pixels come with many exclusive functions under their arms, such as “Sounds”, the recognition of songs that sound idly, except when looking at the mobile screen. The best MOD to use ‘It’s Playing’ on other Android phones has been updated to work without root, as long as you have Android 12.

AmbientMusicMod is the most comprehensive MOD that lets you use ‘It’s Playing’ on non-Pixel Android phones, but until now you had to use root and/or Magisk. The latest version is more affordable I’m glad you’re carrying Shizukuthe app that is sometimes considered root light because it allows apps to access ADB easily and without the need for root.

Pixel’s ‘It sounds’, for everyone

Google’s personalization layer has its loyal fans, both on Pixel phones and otherwise. For those who want to turn their mobile into a Pixel, the most radical option is to install a Pixel Experience ROM, although there are also options to use small exclusive options with specific applications and MODs. For ‘It sounds’, the most complete application that brings the function to other mobiles is undoubtedly background music modOpen source.

The big advantage of Ambient Music Mod is that now you don’t need root or Magisk anymore, although on one condition, that your mobile has Android 12 and you have Shizuku instead, which allows other applications to access ADB. Installing and running Shizuku can be a bit tedious, but it’s definitely easier than rooting your phone. Mind you, Ambient Music Mod works best – and with full functionality – if you use it as a mod for Magisk. 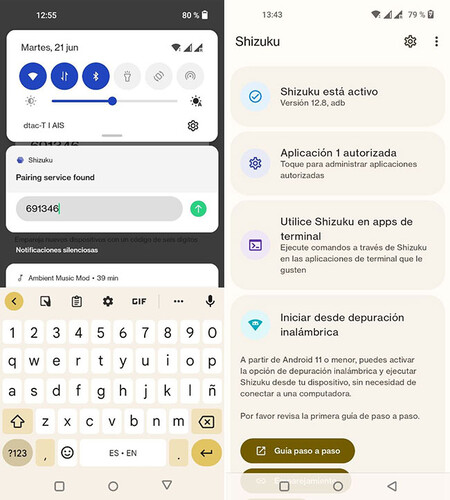 On Android 12 you will need to have Shizuku active

With Shizuku up and running, the next step is to download and install the latest Ambient Music Mod from GitHub. The app guides you on its first start through the process of granting permissions, download music recognition database and Shizuku’s configuration, if necessary.

As part of the installation process, the application is downloaded a modified version of Android System Intelligence, which is responsible for recognizing the songs being played. It is necessary to install it. 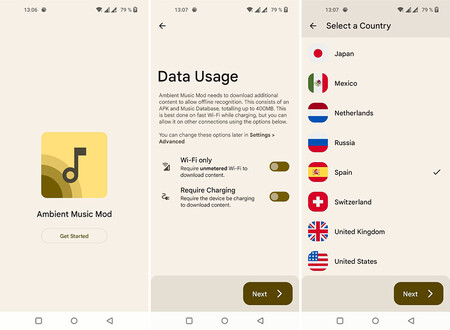 Ambient Music MOD is an extremely refined application, with many options so you can configure exactly how you want it to be integrated into the system. You can, for example, set whether you want song recognition to show up as notifications or on the lock screen, tinkering with the Accessibility Service to try and mimic the Pixel integration (unfortunately, it does not work on all mobiles).

In the options you can also change the listening time, if you wish download the cover of each song or if you want it to work at night and with the mobile without recharging. As if that weren’t enough, there are more options in the Advanced section. 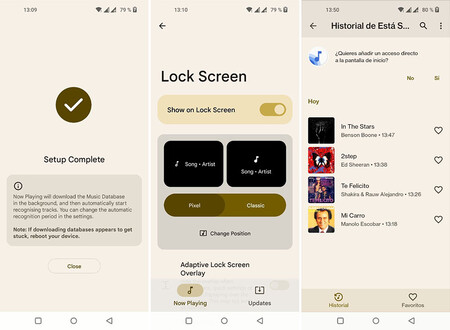 With everything set up, all you have to do is sit back with your arms crossed while your mobile automatically recognizes songs sounding around you. When this is the case, you will be able to see them in the notification and in the recognition history, in the application itself. The application performs recognition every moment (by default, every minute), but if you wish, you can also perform manual recognition at a specific time.

Apple challenged designers to remake its icons as if it were the 90s. It’s like time travel