Warning, this iPhone has a broken screen: Rumorsfera

Of all the fundamental elements that make up an iPhone, the screen is the first that we always find and the one with which we identify the most. Therefore, keeping it in the best possible condition is essential for a good user experience. So much so that Apple plans to introduce a Screen break detector on future foldable iPhones.

If we add future screens or flexible screens to the screens we already know and use, it is even more judicious to add the detection of small breaks. Because? Because if it is obvious that significant damage will be visible without it being necessary to report it, small, almost imperceptible damage may decrease the resistance of the screen and be the hammer of more serious damage

Faced with this situation, Apple is studying the possibility of including a rupture detector in future foldable iPhones, which we know from the patent entitled “Electronic device display with monitoring circuitry using a crack detection resistance” in which the company wishes use the resistance of the screen to measure its integrity. 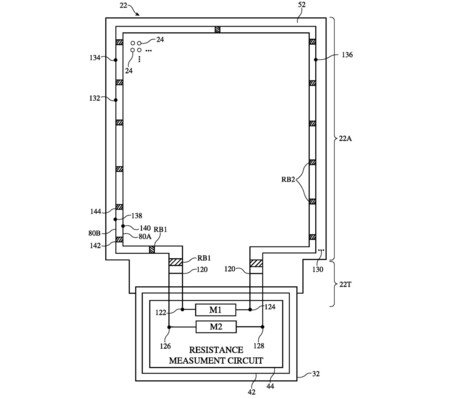 Apple’s proposal is to add an additional section at the edges of the screen which, in addition to ensuring the connection with the device, would accommodate breakage sensors, among others. Thanks to the deformation detection resistors Apple could measure the stiffness of a screen. A mechanism that would be accompanied by circuitry capable of slightly heating the screen in certain areas to increase its malleability.

Timely notice would allow a repair to be arranged before the situation made it impossible to use the phone.

By presenting this information to the user, we may be warned about the possibility of needing to repair or replace the screen. without having to wait for the situation to become untenable

. In a way, this technology reminds us of the battery service advisories of our Macs, we don’t have to wait for the battery to run out or the screen to break to schedule an appointment and repair. .

With those kinds of patents, we can clearly see the amount of technology and research and development behind small functions that, although they may seem far away now, we will take for granted in a few years. Ultimately, developing a foldable phone is more than adding a flexible display to something that already exists, it is thinking about many details and supporting technologies so that the user experience is the best it can be. .

Round Up: Realms Deep 2021 – Every Game Coming To Nintendo Switch