we face the Exynos version with the Qualcomm version

Despite the superiority (at least on paper) that Qualcomm processors have historically displayed, Samsung continues to use Exynos in Europe. Its high-end, like the Samsung Galaxy S21 Ultra, have the Qualcomm Snapdragon 888 in other territories and the Exynos 2100 in Europe: the same mobile with a different heart.

We wanted to check if these differences are noticeable and which of the two units is more recommended.. For this, we painstakingly compared a Samsung Galaxy S21 Ultra with the Exynos 2100 to another S21 Ultra with the Qualcomm Snapdragon 888.

Technically speaking, the Exynos 2100 and the Qualcomm Snapdragon 888 are quite similar, although there are some important differences that cannot be seen with the naked eye. The processor in both cases is made up of ARM’s new Corte-X1 core, along with three A78 and four A55 cores. Although they look like clonic structures, Note that Qualcomm personalizes its cores

(Kryo), so it is one step ahead of Samsung.

There are also GPU differences, the Mali-G78 MP14 compared to the Adreno 660. We are already making the small one for you. disclose about what The Snapdragon 888’s GPU performs considerably better, although at a technical level there are not so many differences. 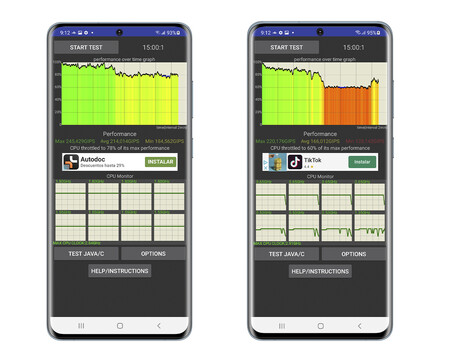 Qualcomm Snapdragon 888 on the left. Exynos 2100 on the right. The red area represents a significant drop in performance.

Before we talk about benchmarks, let’s put these two phones to the test. The best way to make a processor suffer is to perform sustained performance tests, which are: make him work at his maximum for as long as possible. For this test, we passed a 15-minute stress test (CPU) twice and 3D Mark’s 3D Mark Unlimited Stress Test, which puts the phone to the limit in multiple passes.

It took two passes (30 minutes) for the Exynos 2100 to start kneeling. The Snapdragon 888 drops, but less noticeably

During the CPU stress test, it was not necessary to make more than two passes to see how the Exynos 2100 drops considerably on the second pass. In other words, by using the maximum CPU for less than half an hour, the Exynos begins to drop in performance, while the Snapdragon 888 resists much better. Being more technical, after 30 minutes of testing the CPU of the Snapdragon 888 fell to 78% of its performance, while that of the Exynos 2100 fell to 60%, almost 20% difference between the two processors. 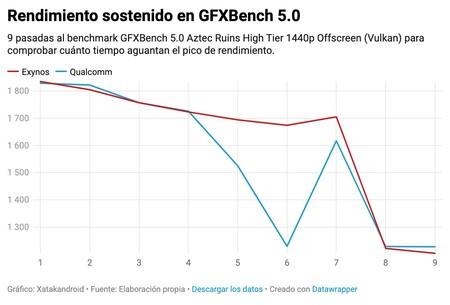 To squeeze them even more, we took both phones the Aztec Ruins High Tier 1440p test 9 times in a row (the maximum allowed by the app), to measure again sustainably. In this case, the results were curious, since the Qualcomm remained similar to the Exynos. In fact, here fell before, although this is to recover to reach the level of Exynos on the next pass. In the last two runs, the most important (in which the phone is already warm and with minimal performance), the Exynos has gone down further, albeit slightly.

Qualcomm Snapdragon 888 on Genshin Impact. It stays at around 40 FPS throughout the game.

Exynos 2100. The FPS rate is also around 40, but it’s much more inconsistent.

Finally, we measured that Genshin Impact FPS can move with maximum graphics settings. Here the graphics show us that Qualcomm is a bit more stable than Exynos, which has more frequent performance drops. Both travel at around 40 FPS (in 2K settings and full quality).

What the benchmarks tell us 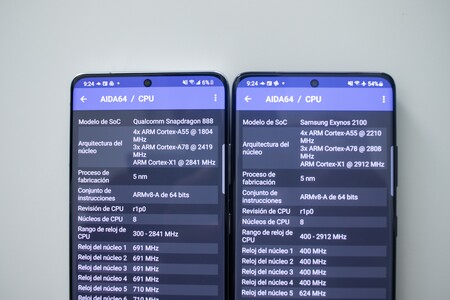 As the benchmarks tell us since the release of the two processors, the Qualcomm Snapdragon 888 is way above the Exynos 2100. We leave you below the data that both phones threw in a large list of tests. Beyond Geekbench, PCmark and 3D Mark (our usual three), we performed specific tests within the tests and used GFXBench, a benchmark that includes more than 20 tests.

Among these tests, we highlight the performance of the S21 Ultra in Qualcomm 3D Mark version in its most demanding version, another difficult stress test. The difference is over 2,000 points against the Exynos, once again demonstrating the added power of Qualcomm. 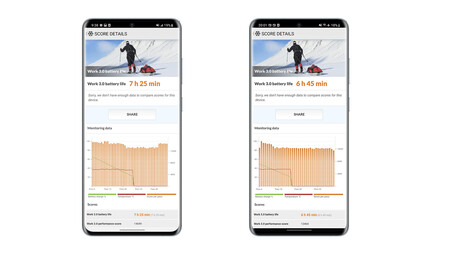 Qualcomm on the left. Exynos on the right.

To test the battery of the S21 Ultra in its Qualcomm and Exynos versions we used the PCmark test, that squeezes phones for a good number of hours. The test was carried out with the two mobiles in the same room, at the same temperature and with the manual brightness level, at the maximum.

The results indicate what we’ll cover later in the user experience section: the Exynos 2100 empties faster

. Concretely, it was the synthetic tests that gave us a difference of 40 minutes, or nearly an hour of screen less, under the same conditions.

Exynos consumption. Much more fluctuating and close to 6000/7000 mW.

To complete these tests, we measured the consumption in real time by tightening the processor to the maximum, with Genshin Impact. Here, the graphics show how much more linear and low Qualcomm’s consumptions are, while the Exynos consumes something else, fluctuating throughout the game.

Even though both S21 Ultra have a 108 megapixel camera, there may be a difference in treatment. This is because the ISP (Image Signal Processor) is not the same in each processor, so the photographs may vary a priori.

Although the Samsung Galaxy S21 Ultra have the same camera, each processor has an ISP, which can lead to small processing differences.

It was enough to take a few photos to verify the slight differences in treatment. These are minimal details that don’t tip the scales when it comes to buying either model., but we wanted to create the thinnest wire possible to save this data that goes unnoticed.

Qualcomm on the left, Exynos on the right. 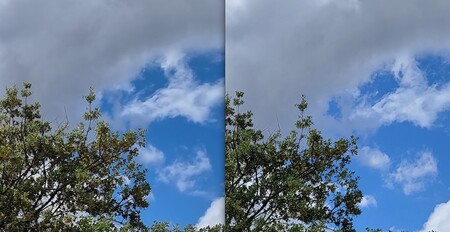 In this first photograph we observe that photography with Qualcomm is slightly more saturated. It is necessary to resort to color spaces like DCI-P3 to fully appreciate the difference in colorimetry, but, given the photograph the average user will take, the difference is not noticeable.

Qualcomm is gone. Exynos on the right.

In this case, we notice some color differences again, but what is most striking is that the Exynos model saves a lot more details. The railing of the Qualcomm model is significantly more blurry. 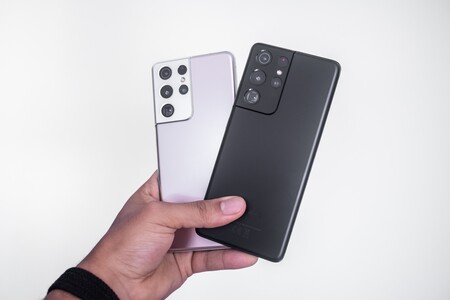 Despite the fact that the Snapdragon 888 is more powerful and efficient, in terms of user experience the sensations are very similar

The main difference we notice in terms of use is that the Snapdragon 888 heats up much more, about three or four more degrees under the same conditions of use, depending on the AIDA64 brand. For the rest, the differences in performance that have been observed in synthetic tests are not noticeable in current use.

Considering the performance of both, we are confident that no reason to worry about performance on the Exynos version, despite the fact that synthetic tests clearly show that it follows a small step behind the Qualcomm processor.