We have news that WhatsApp has been testing the migration of chats between iPhone and Android since April, although it was only last week, after the Samsung Unpacked event, when the function that will allow us to export our conversations from iOS to Android has been announced. A few days later, this function begins to appear in the beta of WhatsApp for iOS

The migration of chats between iPhone and Android, ever closer

Last week, WhatsApp backup between different operating systems was officially announced, which will allow you to migrate between iPhone and Android without losing chats. As reported by WaBetaInfo, in version 2.21.160.16 beta for iOS the feature starts to be enabled. You can find it in setting, in the “Move chats to Android” section.

The function must still be active on Android, where it has not yet been deployed universally 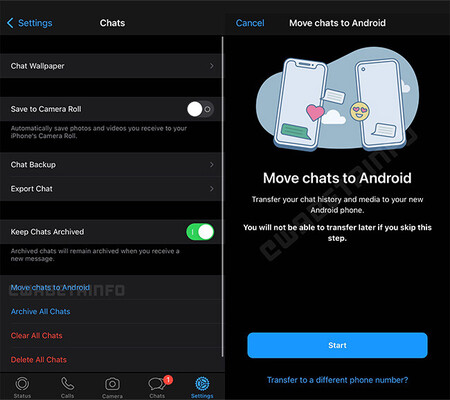 The main downside here is that in order for us to be able to transmit files between iPhone and Android, the Android phone has to allow the process. For the moment, the the function is not active And when it does, it will be exclusive for a few weeks to Samsung Galaxy Z Fold3, Galaxy Z Flip3 and other Samsung devices.

So it remains to wait for the function to reach the rest of Android devices around the world, as well as to leave the beta of iOS and move to the stable version, so that it can work universally. In the case of using Samsung, we will have to use Smart Switch, and in the rest of the devices everything indicates that Google Data Transfer Tool will be used, although the implementation depends on each manufacturer.

Marvel’s Avengers: Spider-Man is still planned for this year

Marvel's Avengers: Spider-Man is still planned for this year