WhatsApp tests chat migration between iPhone and Android, according to WABetaInfo

Facebook is continuing its plan to connect all of its messaging apps into one and we are seeing steps in that regard. According to WABetaInfo, one of the main ones is the ability to use WhatsApp on multiple devices at the same time as well as the possibility to migrate chats from one platform to another.

One more step and still very far from other alternatives

Currently, and since its launch, WhatsApp only works from one device

. It is true that there are web versions of the service, which may later look like apps on some platforms, but in the end, all of them are supported by a single device which, until now, was either a iPhone or Android mobile without the possibility of switching between them.

Facebook seems to want to change that, because in the most recent beta of WhatsApp, the following screenshot appears along with this text:

When the user tries to link a device that has a different operating system to their WhatsApp account, it is always necessary to update to the latest WhatsApp update available in the App Store or TestFlight, in order to avoid any compatibility error with the version of Android. 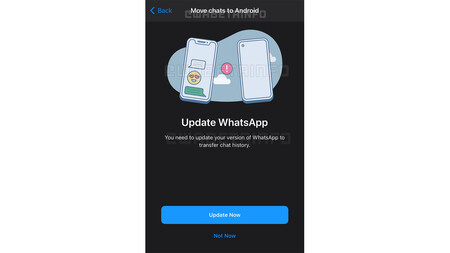 We do not have more information on this feature and even less on its possible arrival date, although we do see the interest of Facebook in facilitating the migration between devices. What is certain is that other services have already benefited from this functionality for years

and they even allow us to import WhatsApp chats if we want to quit Facebook services, which has been happening since Facebook announced that it will soon be sharing more data than WhatsApp collects. A practice that the GDPR does not make applicable to European citizens, but which does not exempt you from accepting new conditions.

At Facebook, they continue to work to, as Zuckerberg announced, merge and make all of the company’s communication platforms interoperable. An advantage when it comes to being able to talk to other people, but it can also be interpreted as a disadvantage in terms of confidentiality.

Genshin Impact is said to be boycotted on Twitter

Genshin Impact is said to be boycotted on Twitter