Xiaomi will stop the development of MIUI 12 to focus on the next big version: MIUI 12.5

It’s official: the next big version of the custom cape will not be MIUI 13, bell MIUI 12.5. This has been confirmed by Xiaomi in its Chinese user community, surely to renew the software for the launch of the first major mobile of the season: the Xiaomi Mi 11.

We are not yet finished 2020 and all the brands are preparing the next launches, those that will arrive in the first months of 2021. The arrival of the Snapdragon 888 sets the standard for renewals, as does the fact that manufacturers seem to be pushing their way forward. launch dates. Thus, the Samsung Galaxy S21 should arrive on January 14; and Xiaomi would not be too confused since The Xiaomi Mi 11 is also said to be almost ready

. As often, the brand’s software will be renewed as will the hardware.

Xiaomi will stop the development of MIUI 12 on December 14 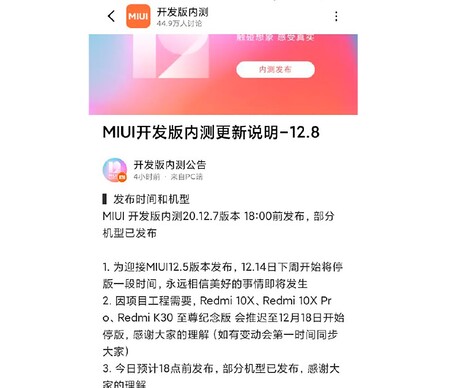 . These updates, which are weekly in the case of the Chinese beta, usually stop when Xiaomi plans a break in development with a new key release. This is what will happen: MIUI 12.5 is in the starting box.

Xiaomi has confirmed the start of development of MIUI 12.5 to users of the weekly ROM beta. As evidenced by the announcement of the Chinese MIUI community, developers will stop the evolution of MIUI 12 to facilitate the arrival of MIUI 12.5

. There’s no more confirmation than that, nor do we know the details of the next release or when it will hit phones. Expect those targeting the Chinese beta to be the first to test MIUI 12.5; While the Xiaomi Mi 11 should be the first phone to adapt the aforementioned version in its stable form, with Android 11 as standard.

The fact that Xiaomi continues to improve its custom layer is great news, also that it is coming up to date in a good part of the catalog. It is still missing, as happened recently with MIUI 12: there will be phones that will not give themselves enough to update.

Xiaomi will stop the development of MIUI 12 to focus on the next big version: MIUI 12.5

Call of the Ocean Review

Call of the Ocean Review