After closing Google Play Music, Google would like you to use YouTube Music as an app to play music, but it seems to be giving up on the fact that many people listen to music in normal YouTube app. For them, he is preparing a new mode that turns the application into a music player.

There’s everything on YouTube, including an endless music repertoire, although the app doesn’t make it much easier to use for this purpose. It could change in the future for Premium users

, with an optional music player mode, which overlays classic controls as the previous or next track.

A better way to listen to music on YouTube

YouTube and music playback they have a complicated relationship. On the one hand, the service has an endless repertoire of music. On the other hand, the interface is not really suitable for playing music, not to mention that the free version does not allow you to continue playing in the background or with the screen off.

of specializing in music. An old-fashioned player. For those who insist on continuing to use the normal YouTube app for listening to music, Google is preparing playback controls, which makes YouTube more user-friendly for music playback. 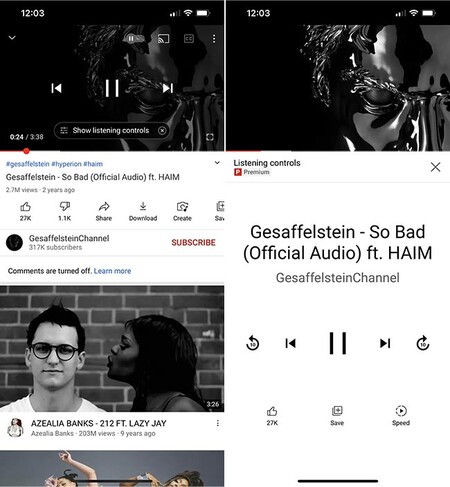 It works as follows: When you play a music video on YouTube, a notice is included suggesting that you show the music playback controls. This clears the interface for buttons, comments, and video suggestions, instead showing the title and author of the song in large

, buttons for the next and previous song, to go forward and backward.

The “bad” news is that functionality is marked as Premium, so it seems to be tied to the YouTube Premium subscription which allows you, among other things, to listen to music in the background on YouTube or use YouTube Music without limits or ads. It’s also a server-side enabled test, so it remains to be seen whether this YouTube metamorphosis into a music player will end up affecting everyone or not.

Check out the opening animation of Scarlet Nexus