Definitive Edition that you can unlock for free

Microsoft knows very well how to heat the environment with a view to Age of Empires IV. The April event not only served to showcase new civilizations, new gameplay and set the game to launch in October, but it gave us a double joy: the definitive editions of Age of Empires II Y III will receive new content. And what is better: the first of them, dedicated to the United States, is played starting April 13.

The arrival of this new content will open up new opportunities for players and really interesting nuances. USA It is a civilization with unique mechanics, distinctive units, and a federal management and trading system that promise to delight fans of the series.

And for a sample, as an aperitif, here is a four-minute preview with the contents and news of the civilization of the United States.

From the outset, his military capacity stands out from the first bars of the game thanks to starting the game with the General’s unit (instead of the Explorer) being able to boost the morale of your troops and make a difference from the beginning.

In addition, it has exceptional and versatile land and sea units, including steamships, which not only have enormous resistance, but also allow you to collect resources, create docks and even train troops. Not to mention that the use of a steam engine gives them unique pursuit and escape capabilities.

But the most unique thing is the political system of civilization itself. Our way of progress is through the addition of Federated States to our Union

, which means an increase in bonuses and new possibilities when it comes to establishing geopolitical ties. A really interesting premise.

The United States, a new DLC that can be unlocked for free AoE III: Definitive Edition

The United States won’t be the last new content planned for A’s heavily revamped classic installments.ge of Empires: Xbox Games Studios is looking to the African continent for the not-so-distant future. However. However, Microsoft gives us new reasons to resume the games as soon as this set of news is available.

Although it is possible to acquire the civilization of the United States through the Microsoft and Steam stores, the really interesting thing is that we can unlock it without spending a penny and based on playing: enough with complete the Fifty States Challenge on Age of Empires III: Definitive Edition to receive and enjoy the content totally free. 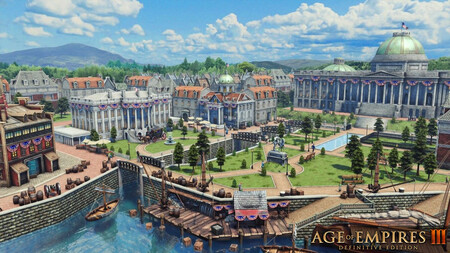 That said, it doesn’t hurt to remember that Age of Empires III: Definitive Edition, as well as the first two installments, it is part of the Xbox Game Pass for PC catalog and, by extension, also stands out among the Xbox Game Pass Ultimate games.

Fans of Age of Empires and the classic strategy are living a second golden age and in October of this year the cycle will be completed with a fourth and highly anticipated new installment.