Three Wonders It was a very special video game, as it was not just one game… but three in one. Although the curious thing is that only two of them had a common link, the third being the discordant note, without being bad at all.

A couple of years ago we got homesick with a retrospective on Midnight Wanderers: Quest for Chariot, the first game in that atypical Capcom collection. A classic that would ultimately serve as inspiration for a run & gun as mythical in SEGA as Gunstar Heroes. And today, taking advantage of the fact that a few days ago the return of this arcade game from 1991 was announced for the future Capcom Arcade 2nd Stadiumwe would like to recall the direct sequel to the aforementioned Midnight Wanderers baptized as Chariot. A sequel that opted for the genre of shmup.

The successful jump from platforms to martian shooters 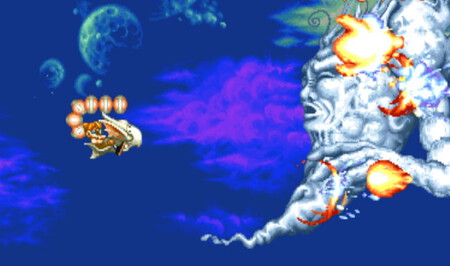 It was quite remarkable in its day to discover that the ending of Midnight Wanders linked directly to Chariotseeing how a God fallen from the sky granted the protagonists of the action platform some wings to continue expanding the power of light and eradicate the demonic curse from other parts of that land.

We went, therefore, from moving on the ground to soaring through the skies as if it were a martian killer. A change of register that today is not so strange, but at that time it was beginning to be exploited in a very timid way. Without going any further, we can mention the Super Mario Land of 1989 or the Toki of TAD Corporation, also from 89, both with aerial or aquatic phases as if from a shoot ’em up in question, despite being essentially standard platform games.

But chariot was specialbeing a sequel that modified the initial approach despite retaining certain elements compared to its predecessor: protagonists, elements of the scene or objects, some enemies or bosses… It was familiar, but at the same time it was a totally different product that complemented brilliant.

At that time Capcom published arcade games left and right and they all enjoyed great quality, being that 1991 especially unforgettable due to the launch of Street Fighter II: The World Warrior, among other jewels of the company from Osaka, such as the one that places us now o Captain Commando and The King of Dragons. Yes, he dominated all aspects of the action. And the ships, of course.

It wasn’t the first “Martamarcianos” of Capcom nor was it the last, collecting several common elements at that time and without denying several reminiscences to genre references, such as R-Type. Here we did not have a “ball” that protected us in the front and that we could launch, but we did have a “tail” that was getting longer and that allowed us to reload special attacks more quickly, in addition to serving as protection for our rear.

One hit was instant death, unless we got armor. But it’s not like it was a shoot ’em up extremely complicated, if not rather affordable as soon as we were experts in the genre and memorized certain sections of some screens. The latter mainly due to the limited speed of our ship and that some enemy shots were quite fast, so in a first game they could catch us off guard.

Chariot, a very special festival of lights and colors 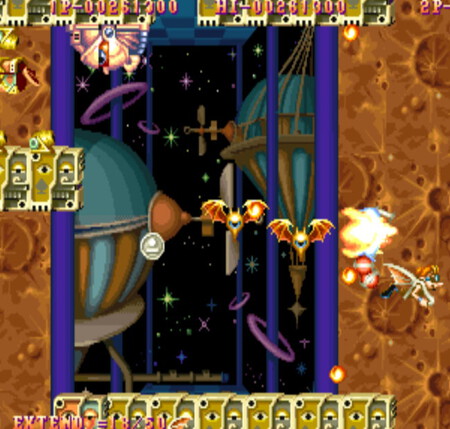 Chariot it was more agile in movement than Capcom’s own Mega Twins that was released a year earlier, in any case, although it had a lack of shooting types. There were basically two: one that expanded to cover a greater range of the screen and another faster and focused in the center.

The funny thing is that their specials ignored their own nature: the one that expanded fired a kind of small laser in a straight line and the other one went around to reach more enemies. But the good thing is that there was no limit, as long as we waited a few moments to recharge them. And the truth is that he did not need much more to be competent, by having small bombs that hit the bottom of the screen automatically or the use of the tail as a defensive element. Seen in perspective, it moved away from the prevailing trend in Japan that bets on “bullet hell”.

Already in terms of setting, this sequel revolved around the signs of the zodiac, having to deal with a good part of them as final bosses. Visually it was very striking, both for the scenarios and for the design of the enemies, with very bright colors and somewhat nice animations at certain times, like that of that unforgettable crescent from the first phase of the game.

He could be blamed for a lack of originality in the last section, by resorting to the hackneyed habit of planting yourself against all the bosses practically at once (again) before facing the bad guy on duty, who was called Lar here.

Chariot will not be the best shooter in the worldbut it still stands the test of time nowadays and we always want to play a game from time to time, no matter how much we still like it more Midnight Wanderers. And without a doubt it is good news that in a few months we will have another possibility to remember him in current systems without having to resort to emulation or old systems such as the first PlayStation, Saturn, PS2, Xbox or PSP, where he was part of various Capcom compilations. Let’s hope the price goes along…

Finally some information that promises to be very difficult