According to what we can read in VICE Games, many of those who decided to return their physical copy of Cyberpunk 2077 to CD Projekt RED after the disastrous launch of the game have received the refunds without having to send the game anywhere.

In principle, the company made a form available to anyone who needed it through which a refund could be requested for a physical copy of Cyberpunk 2077. The deadline to carry out the request was December 21, 2021. Once everything was verified on their part, in theory the company would make said refund and ask players to return their copies in some way.

For now, at least in the cases of the players they’ve spoken to at VICE Games who they have already received the moneyMost via PayPal, no one has asked them to take or send their copies anywhere.

A certain Steve got hold of the collector’s edition, which costs $ 250, and decided to ask for a refund. CD Projekt accepted the request and returned the full amount, including taxes, but no one has asked him to return the copy anywhere

. And it turns out that the collector’s edition, in addition to the game itself, includes a good handful of extras, including a spectacular figure. Right now Steve has the money and everything else. 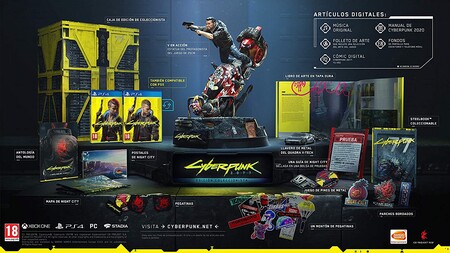 Something similar seems to be happening with the digital copies that have been obtained buying a code in an establishment outside of the PlayStation or Xbox digital stores.

A player claims that he contacted CD Project RED using the aforementioned form and stating your case, after which you received a message from the company confirming that, after having reviewed everything, they were proceeding with the reimbursement. A week later, this person received the money, but their game code was not deactivated and they have been able to continue playing.

The company is still processing refund requestsSince not everyone who ordered it correctly before the deadline has received the money or the confirmation of whether the return is accepted or not, so we will have to see how this all ends.

In the duel between Windows 11 and the “old” Windows versions, there is a crystal-clear winner

The PS3 from head to toe

Dragon Ball returns to Fortnite with Gohan and Piccolo

Our greatest Flight Simulator expert has written a 500-page book