these are all the news and differences with the other models

No more rumors: Nintendo Switch model OLED, the new model of the successful Nintendo Switch, is now official. A console with a better screenA subtle redesign to look at but really interesting when it comes to portability and, in the process, a new charging cradle in which the LAN port comes standard. Of course, the maximum attraction remains its brutal catalog of games inherited from previous models.

Nintendo (finally) has put on the table the cards that we all knew he had in his hand, but many of us have not cleared up the great doubt: to what extent is it worth betting on the new OLED model, which will arrive this year, in favor of the original or Nintendo Switch Lite? Because, unlike the 2019 review, the new 2021 Switch will share shelves with the other two consoles.

Precisely for this reason, in iGamesNews We have prepared the definitive comparison between the three Switch models, including everything officially announced about the OLED model and comparing it with what previous Nintendo systems already offer, as well as its compatibility with the games and accessories released.

The OLED screen: your games will look better, but not in 4K 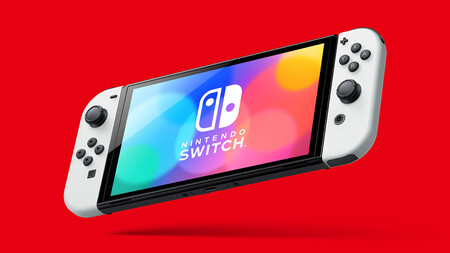 The name of the console itself is a declaration of intent. Nintendo Switch model OLED

From here, the doubt is born by itself: What are OLED screens? To start with, the main difference is that feedback is not used. As indicated by Nintendo itself, this technology displays images using the light emitted by each pixel individually, achieving more intense colors, darker black tones and, consequently, greater contrast.

As in the models already available, the screen of the Nintendo Switch model OLED it is capacitive touch, so that we can continue to create our levels of Mario Maker 2 or playing the classic games of 51 Worldwide Games from the screen. Of course, we will have a little more of screen.

That said, the great difference compared to the 2017 model when it comes to playing is summarized in its way of offering the player intense colors and higher screen contrast without, by the way, affecting the battery life: its autonomy is from 4.5 to 9 hours on laptop. Exactly the same as the original model review. 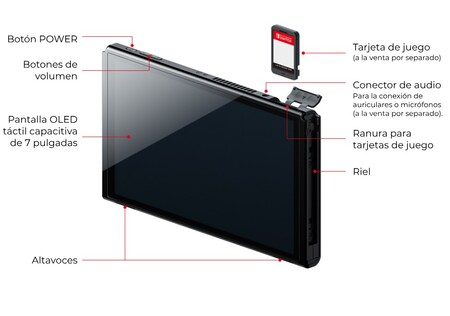 Beyond the screen, and according to statements to The Verge from Nintendo itself, Switch model OLED it doesn’t have a new CPU or bigger RAM than previous Switch models. That is, on paper, when we plug it into our televisions, the games will look the same. Console in hand, it is something else.

Nintendo has taken the opportunity to update console layout with Nintendo Switch OLED model. Changes that, logically, are really focused on its use beyond its own base. Thus, we can see that the original simplicity is manifested from its screen, but on its reverse we are already beginning to notice the first changes. 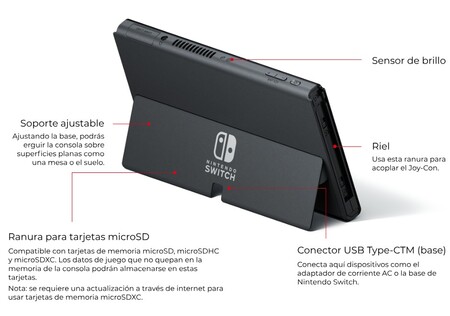 The original model tab has been replaced by a wide bracket and, most interestingly, adjustable. So not only is more stability gained by using the console on the Tabletop, but we can accommodate the tilt. 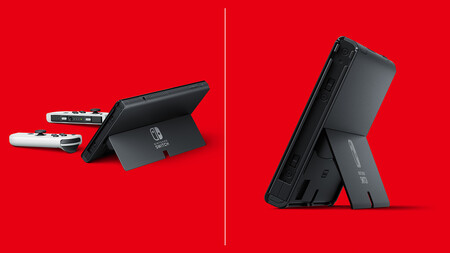 On the other hand, the built-in speakers under the screen itself have been optimized. According to Nintendo, when playing in portable or tabletop mode we will perceive a clearer sound, although no more details have been offered about it. 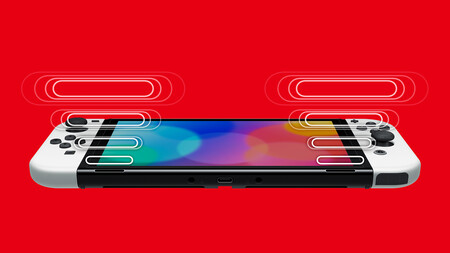 Last but not least, the Nintendo Switch OLED model is a little bit wider than the original console. The Joy Con are, in essence, the same, but the dimensions with them coupled are not, so that:

Special mention, and although it is not perceived from the outside, a novelty has been introduced in the OLED models of Nintendo Switch: internal console storage has doubled to 64GB versus 32GB of previous models. It is still very little, of course, and the acquisition of a Memory Card is more than recommended if we bet on the digital format. Here there is little to say that is not already known. 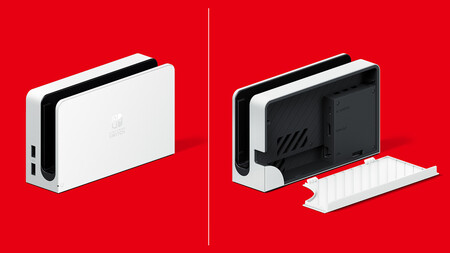 Upon opening the box, and along with the OLED model Switch itself and the respective Joy-Con (which are similar to those already available), Nintendo will include a new base model with one difference to keep in mind: a new wired LAN port.

The Big N will continue its premise of a laptop that you can take wherever you want. And yes, until now, the wired alternative to the Wifi connection went through an adapter that is sold separately, the new base will allow us to connect a LAN cable directly to the console dock, being adjusted in the same way in which we plug in the HDMI and power cord.

In addition to this new port, the new base -whose color will match either of the two OLED models- will continue to offer two USB ports and its size will completely cover the screen on the sides, leaving room for the Joy Con to be loaded and the upper part to facilitate removal.

That which, This new base is compatible with the previous model of Nintendo Switch and, in the same way, we can load or play in TV mode with the OLED model from the original base.

With the improvements and changes ahead, it is time to put the three models of Nintendo Switch face to face.

As we already mentioned, the greatest asset of all the Nintendo Switch models is the catalog of games that the Big N has treasured since 2017, including exclusives, Deluxe re-releases of hits from previous systems, a very sweet retro catalog through Nintendo Switch Online and in the eShop and a very powerful support from Third parties with great games of the caliber of DOOM Eternal, The Witcher 3, Dragon Ball FighterZ Y Overwatch.

In this regard, all the games released to date can be enjoyed on the OLED model Nintendo Switch, although the only improvement we will notice will be when playing on a laptop, noting an improvement in color quality and contrast and the promise of clearer sound. For its part, we can also enjoy the additional advantages of the Joy Con, including gyroscopes and HD vibration. Perfect to enjoy Super Mario Party.

The only exception when it comes to game compatibility would be Nintendo Lab, Nintendo’s experimentation and creation set, since it is possible that the new dimensions of the OLED model console mean having to accommodate or create new plates on our own to be able to enjoy the different Toy-Cons.

When it comes to accessories and peripherals, the Big N has ensured that all accessories currently available for previous models are compatible with Nintendo Switch OLED model. Although, for reasons of logic, the difference in size very possibly implies that we must acquire a new case or casing. 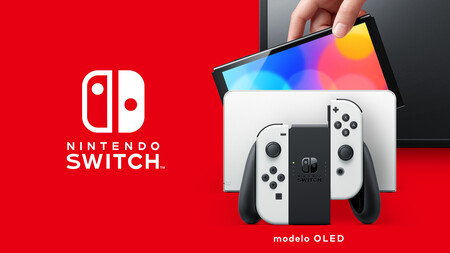 Nintendo Switch OLED model will go on sale worldwide next October 8, 2021. A date that is chosen in a very intentional way, since it will share a launch with Metroid Dread and it will strategically anticipate Black Friday.

As in 2017, Nintendo will offer two variants whose only difference will reside in the color of the Joy Con and, as a novelty, in that of the base of the console itself. However, the design of the box becomes vertical, seeking not to confuse the buyer. Thus, the launch alternatives are: 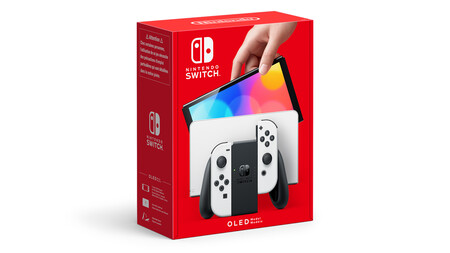 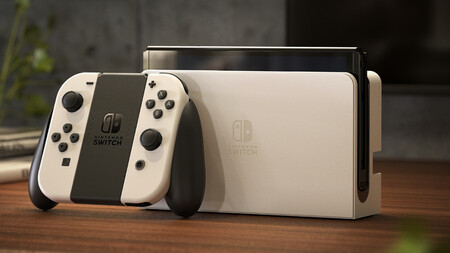 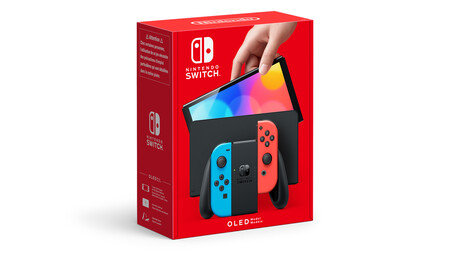 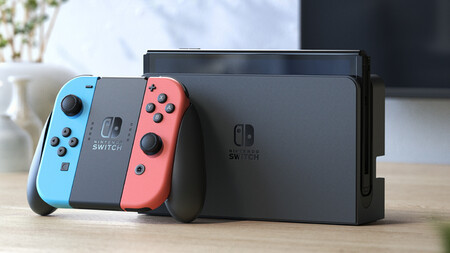 As expected, Nintendo Switch OLED model will share interface and eShop contents with previous models and will benefit from the same plans of Nintendo Switch Online Annual Family Subscription.

For its part, and finally, Nintendo Switch OLED model will be available in autumn Worldwide, including Europe and European territory such as America and Japan.

Young Royals: Netflix with update and pictures of Season 2 of the coming-of-age drama series