This is how brutal DOOM Ray Traced looks in motion, the new mod that adds Ray Tracing to the cult classic

There are 666 reasons or more to continue playing the classic DOOM and surrender to its barbarism almost thirty years after its original release, but we particularly like the last one: the shooter that revolutionized video games has just received a new mod that opens the doors to the ray tracing technology, and the result is simply brutal.

Developed by Sultim Tsyrendashieva Software engineer graduated from Saint Petersburg University, DOOM Ray Traced updates and gives a ray tracing treatment to the original levels of DOOM originally released in 1993, respecting the original iD Software sprites but giving its levels spectacular depth, lighting, effects and reflections. And, for sample, the trailer of the project.

El mod DOOM Ray Traced can be downloaded totally freealthough it requires that we have a copy of the classic DOOM for proprietary PCs. Something that is quite likely, although its current price is not an obstacle either. On the other hand, through the notes we are told that it currently works on Nvidia cards. Of course, Tsyrendashiev opens the door to AMD hardware by inviting everyone to collaborate on the project.

What can we expect from DOOM Ray Traced? The same levels and content of the game that blew our minds, as well as its frantic and timeless rhythm. But, in the process, a reimagined and spectacular setting that drastically benefits the feeling of walking into hell itself armed to the teeth. 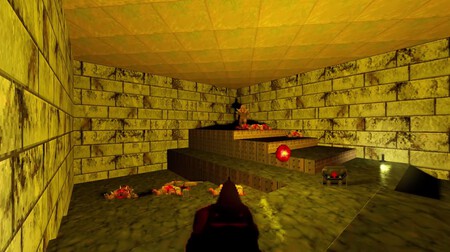 For its part, it must be recognized that both Bethesda and iD Software continue to pamper one of their star sagas. Not too long ago the classic DOOM saga, including the mythical DOOM 64, was relaunched on all current systems, adding a lot of extra content and updating its multiplayer options.

For its part, DOOM Eternal took up the witness of the legendary saga unleashing hell on Earth on PC, desktop and even Nintendo Switch with a superb custom version.

And watch out, that the new content of DOOM It’s not just in the hands of fans and Btehesda: Legendary John Romero recently created a new DOOM II level and extended his legacy with Sigil, the unofficial sequel to DOOM. The Slayer definitely has a lot of war ahead of it and we can’t wait to see what plans there are to celebrate the game’s 30th anniversary.

deals on peripherals with 50% off