In 1992 it exploded el boom for fighting games in arcades. Street Fighter II started the mech, of course, but Mortal Kombat knew how to replicate Capcom with more brutal punches and finishes and some digitized graphics that left us speechless. 30 years later, Eyeballistic Games He leaves us amazed again by asking what the original trilogy of the fatality saga would look like in current systems and in 4K.

Via your YouTube channel, the CEO and chief executive officer of Eyeballistic Games Joe Tresca has shown a prototype of Mortal Kombat Trilogy made with the Epic engine as part of a bell

dedicated to restoring the classic in remake form. A aperitif showing a stage, the interface, and two iconic fighters. And the truth is that you don’t need much more to leave us astonished with the result.

At this point we have to go back to 2016, when the Eyeballistic team -who consider themselves staunch fans of Mortal Kombat– they raised Ed Boon (co-creator of the saga) to make a remake of the trilogy in HD. As they count in the Change.org dedicated to the initiative

Despite Boon’s approval, Warner was not convinced the project would pay off and scrapped the idea.

Currently, and after having some experience in recent systems, Eyeballistic seeks visibility for the initiative to take off definitively. Not with intentions or promises, but w ith moving prototypes.

In fact, and as you can see, the first preview of this HD remake of the trilogy doesn’t look bad either. However, for all intents and purposes it is a mere prototype.

In addition to the characters of Scorpion and Baraka, the team has developed various backgrounds and models of other fighters such as Cyrax and Sektor. All in all, it will be interesting to see how convincing characters like Liu Kang, Sonya Blade or Johnny Cage look who, unlike those shown, have their faces exposed and they were played by real actors.

However, it must be admitted that the level of loyalty achieved to date is truly flawless. Replicating the original pixel art masterfully and an extra pampering through the Unreal engine, but also giving the replica through the original gestures, poses and animations to the original games. 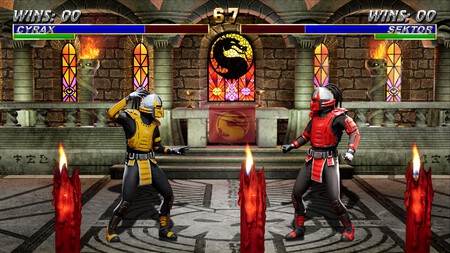 In any case, this year Mortal Kombat will be celebrating 30 years, and we take it for granted that Ed Boon and Netherrealm Studio have something on their hands to celebrate. Ultimate Mortal Kombat 11 was the perfect clasp for a delivery as round as brutal, but the team is already working in his next game. Will we see Scorpion and Sub-Zero again spreading blood on the stages? We cross our fingers to make it so.

For our part, we leave you with the Mortal Kombat 11 launch trailer, which was conveniently accompanied by the mythical anthem of the game during the 90s. Pure nostalgia!

Avalanche Studios (Contraband) will unveil an unprecedented license in 2022

The new Valorant agent arriving in 2022 is leaked by Twitch himself!

Fortnite players on iOS can no longer spend their V-bucks

new box office record of all time, but it still disappoints

Not even Star Wars can compete with that now

The new Valorant agent arriving in 2022 is leaked by Twitch himself!