Every so often a company announces the return of a video game from previous generations in the form of a remastering or remake, which allows users to enjoy them if they did not have the opportunity at the time. One such case will be Atlus with Shin Megami Tensei III Nocturne HD Remaster.

The name of this JRPG leaves no room for doubt, because this installment of the saga will return next month with a high definition remastering. We have had the opportunity to try a preview of the first hours and we are going to tell you what feelings it has produced in the next preview that we invite you to read.

The end of humanity in a world in chaos 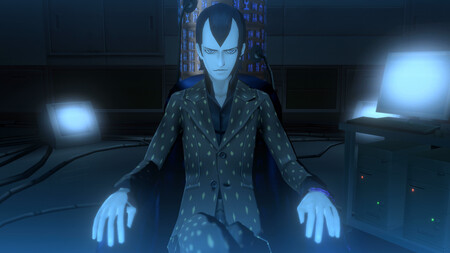 The plot of the game begins somewhat confused and the truth is that these first hours have left us with more doubts than answers, although it is to be expected that as we go deeper into the story the balance will tip to the other side. Be that as it may, the action takes us to Tokyo, where a group of students live day to day until suddenly the world is thrown into chaos.

A group of demons have invoked La Concepción, an ethereal apocalypse tasked with producing a demonic revolution in order to reborn the world completely from scratch. This means that the cities are completely deserted and there is practically no trace of any human life, just their souls, while the demons roam freely everywhere.

Without really knowing why, a strange figure grants our protagonist the ability to survive this situation and at the same time some powers that will be of great help to deal with this threat. At least he will not be alone, because two other of his companions, as well as other important figures, have also managed to escape from this purge that has been carried out worldwide. 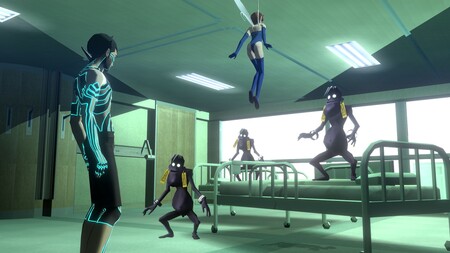 During the first bars of the adventure we have not been able to delve much deeper, although it is not a plan to reveal too many details in order to avoid spoilers. What you can be clear about is that, if at the time you played the original title that was published on PlayStation 2, you will not find any surprise, because in this aspect it is exactly the same game that hit stores 18 years ago.

Even so, you can see in many details that it is a classic title because it feels very old-fashioned because of the menus or the animations of the characters. As much as it is said that it is a remastering, the only thing that can be appreciated is that graphics are sharper. In fact, if anyone expects a spectacular visual change, they will find that their expectations will not be met at all.

It’s more, cutscenes haven’t even been modified one iota and they are exactly the same as the originals. Without a doubt, all this is a bit shocking because suddenly you go from seeing more defined characters and settings to something more pixelated and on top of it with bars on the sides of the screen. At least one great novelty is that now all the characters have voices in English and Japanese, while the subtitles have been localized to Spanish.

As a good JRPG, the combat system will leave us with some turn-based battles in which our protagonist will fight against the demons that appear on the stage in a completely random way. At first it will start alone, but we can make the group grow thanks to the possibility of putting the enemies that we meet on our side.

Yes indeed, convince them to join our ranks it won’t be as easy as just talking to them. The demons will make it clear from the first moment that they are the most evil and in most cases they will flatly refuse to accept our request or directly by their way of speaking they will show that they are missing a neuron by not understanding what we say to them. To this will be added the fact th at in large groups there will be demons who will refuse to allow their companions to accept our request and will get in the way to attack us, either out of jealousy or because they consider it unacceptable for a human to request such a thing. 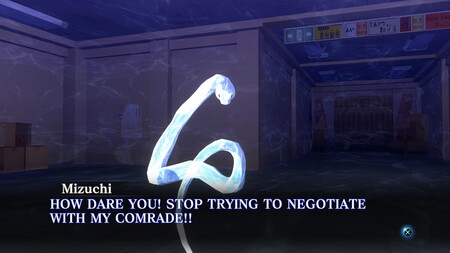 In spite of everything, it will be possible negotiate with demons, although the conditions will be set by them. This will cause them to sometimes ask us to extract life points or also to give them money or other objects that we carry in our pocket. However, accommodating all their requests will in no way guarantee that they will become part of our side, so by playing we will learn to know when to say “no“, which will mean that the devil does not go ahead with the negotiation and heeds us or instead leaves the way he came, although at least sometimes he will give us an object in exchange.

On the other hand, you can see that the game is developed by Atlus because a good number of the enemies that we will fight also appear in the saga Person. In addition, something that both franchises share is the possibility of merge the demons that we find to turn them into a more powerful creature with new abilities or others that will inherit from their previous versions, hence it is important to get more enemies to join our mission to have more options to choose from.

Although most of the time it is normal to attack without stopping, we must always take into account who is the rival in front of us, because sometimes, especially with one of the final bosses that we have faced in this advance, you have to take into account their weaknesses, so it is advisable to use certain types of skills to cause more damage than normal depending on the type of each one. In spite of everything, so far no meeting has presented us with problems, although later we will see if the situation changes or not. 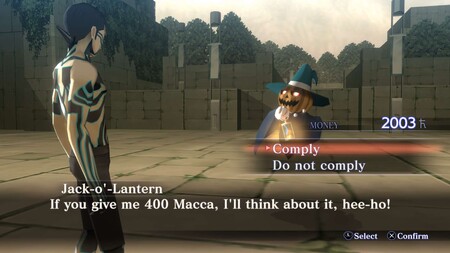 In any case, so that no one gets stuck in the game and is suitable for everyone, the difficulty level can be modified at any time and choose a completely new one that will make everything easier, for those who prefer to focus on the story without having to worry too much about everything else. What we have missed is some more saving point, although at least the progress can be suspended at any time and continue later at the same point where we left it.

In short, Shin Megami Tensei III Nocturne HD Remaster At the moment it is looking like the good RPG that it already was at the time, although not a worthy remastering. In a few weeks we will publish our final verdict, but from what has been played so far it seems that the title will not impress too much for those looking for a much improved version compared to the PS2 game. Its release is set for the May 25 on PS4, Nintendo Switch and PC on Steam.