"World of Warcraft" is a board game with cute Warcraft

The creator of "Little World" has teamed up with Blizzard to create the "World of Warcraft" version of its board game.

World of Warcraft It is a new board game based on the Small World mechanism of Days of Wonder. This game allows you to choose between tribes and alliances, use their special abilities and fight for control of Azeroth.

An interesting mechanism is that you can plan for the decline of your game and lead a new race into the future. World of Warcraft mini-games can be completed in 40 to 80 minutes, and supports 2 to 5 players.

Days of Wonder and Blizzard created original works based on these characters, and the authenticity can be clearly seen in the early pictures of the game. "World of Warcraft" will be launched sometime this summer, the price is 60 US dollars / 60 euros / 57 pounds. 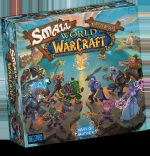 Alan Wake is coming to Game Pass for its 10th anniversary

Random: Where's That Claim for Metroid Boxes in Mario Trailer?

Dwayne “The Rock” Johnson saves Fortnite in the Chapter 2 finale

Random: Where's That Claim for Metroid Boxes in Mario Trailer?