Nintendo publishes a peculiar message and then deletes it: “Here he comes …” – iGamesNews

We bring a peculiar message that Nintendo shared on social media just a few minutes ago. Shortly afterwards it has been eliminated by the company, but fortunately we managed to take a screenshot of it and here we bring you all the information we know about it. 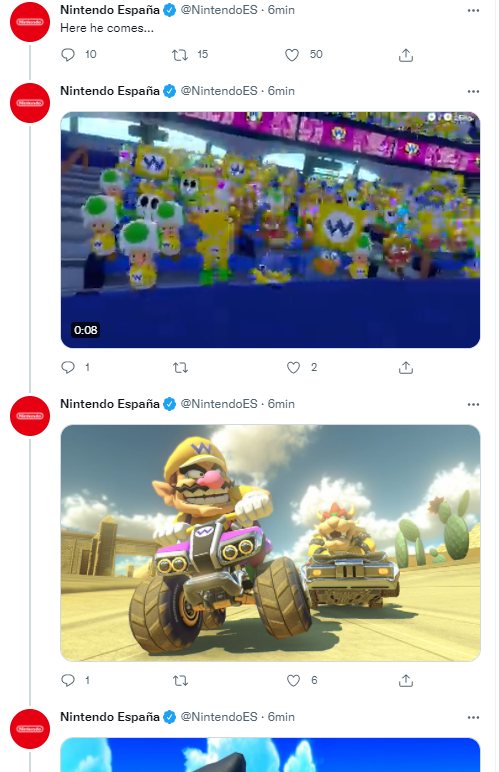 The company alarmed fans by posting an initial tweet that read: “Here he comes …” (“Here it comes …”). Minutes later, he responded to that same tweet with a thread of posts featuring Wario in different Super Mario games, ending with a photo of his next game, WarioWare: Get It Together!

It is believed that it is a kind of promotion for this title, whose premiere is scheduled for the September, 10th. However, the initial tweet shocked the fans and the fact that the thread has been deleted has also caused quite a bit of confusion. If you are interested, you can see the thread on the Nintendo Europe account, which is still available at this time:

Finally, it should be noted that Nintendo Europe has shared the thread again, this time with the first tweet in Spanish. This is believed to be the reason you deleted the message.

The truth is that many fans now They have responded surprised to this thread. It is true that Nintendo does not usually promote their games with these types of publications and the fact that the first message was so strange made many of their hearts stop immediately. Add to that the fact that the company deleted the initial message, which made many think that it could be a preview of a future announcement.

What do you think about this type of promotions? The uproar has certainly had a great effect, don’t you think? We read you in the comments.

Despite its five years of life, the Huawei P9 receives a new update correcting the system errors