everything you need to know about the Uncharted character

The birth of this character is still a great mystery, even when it is known that his year of birth is between 1975 and 76 and his real name is Nathan Morgan. His childhood was spent, until the age of five, with his parents and his older brother, Sam Drake (Sam Morgan). When his mother died of an illness, his father ceded custody of both to the State, ending both at the Sir Francis Orphanage. Raised by the nuns, Nathan learned Latin and developed a great taste for history.

When he came of age, Sam went to the orphanage one day to tell his brother that he had found work, so he would have to be absent for a whole year. This news did not please little Nate but everything changed when Sam offered him the opportunity to accompany him. The reason? That he had found a way to retrieve your mother's stuff, which had been sold by his father.

They go together to a large mansion in which they find a whole collection of priceless objects and, among them, their mother's notebooks. But when they are going to get away with these, they meet the owner of the mansion, Evelyn, pointing a gun to call the police. However, something stopped her: Sam's mention that the booklets were from the mother.

Evelyn claimed to have met her and that she was the best his torian she had ever seen. Allowing both to march with the notebooks, Evelyn is willing to take care of the police

. But, unfortunately, he dies of a heart attack, so both brothers have to escape.

And this is when Sam tells Nate that they have to escape away and change their names. Moment in which both are reborn as "Nathan Drake" and "Samuel Drake" by taking inspiration from Sir Francis Drake, the pirate his mother was investigating.

What games does Nathan Drake appear in?

Of course, Nathan's story keeps great secrets. But this is presented throughout the Naughty Dog games. And although we have Uncharted: The Nathan Drake Collection to join three of the titles of his impressive saga, these are the titles in which the treasure hunter is present since in The Lost Legacy, Nathan Drake is absent.

Uncharted: Fight for the treasure

Following with Nathan Drake and his biography, we have the arrival of the first title of the series. In this we know the character while retrieves the coffin of Francis Drake, who was buried in the sea. Although he is not alone, but is accompanied by the journalist Elena Fisher while recording the events for a documentary. The coffin has a newspaper inside that shows that Drake had faked his death.

Thanks to this notebook discover where El Dorado is located, the legendary city of gold. And that's when an ambush causes them both to have to be rescued by Victor Sullivan, Drake's best friend. It is precisely with this who gives Elena corner to leave in search of El Dorado. Although the events are twisted. But here begins the story of the great Nathan Drake.

In this title we know the story two years later of the first game. In this we see Nate wake up with a wound while he is in a train hanging from a cliff. Through flashbacks it will be revealed how an interesting offer came to him to retrieve a Mongolian oil lamp in the Istanbul museum, although this offer is of great interest to Drake.

It keeps inside a map that shows where Marco Polo's treasures are. Although, in regards to the story, for many it is a surprise since it keeps inside some of the stories in the time when he met Sully, Her best friend.

In this story we find the return of Nathan and Sully meeting with Talbot in a pub in England. When it comes to buy him Sir Francis Drake's ringNate and Sully accuse him of trying to buy the ring with fake bills. Something that gives way to a fight against Talbot's thugs and, shortly after, the theft of Nate's ring.

And here we give way to a flashback 20 years ago, thus being able to know the origin of that ring. And why this is so important for the adventurer. One way to know the story after his childhood, the story of a teenage Nate.

We arrived at the last installment starring Nathan Drake and he presents his story three years later of Uncharted 3. Here you have left the treasure hunt behind, but the action returns to his life. The reason? His bro ther Sam has returned. And here we find the Nathan Drake of Uncharted 4 that never ceases to amaze.

Of course, its history gives way to many want to know an Uncharted 5 with Nathan Drake. But, for the moment, its development is still in a rumor.

For many, the Uncharted movie is a mystery, especially since there seems to be all kinds of problems for its development. Above all, in regards to its actors. There were many favorites, such as Nathan Fillion or Chris Pratt for Nathan Drake. But finally this will be played by Tom Holland, best known for his role in the latest Spider-Man movies.

The date of its premiere, so far, is a mystery. Although, in regards to its plot, it is rumored that can be placed at the moment he meets Sully. A moment in which we can meet a young Nathan Drake, so the actor could be very well chosen for this moment.

His year of birth is one of the most unknown elements of the saga.

Nathan Drake and his phrases are remarkable. Especially when he tries to socialize with his enemies to get out of the way.

It has no real offspring with Sir Francis Drake.

He lived in the orphanage for approximately 12 years.

His design is inspired by Johnny Knoxville.

In most of the titles, it has a special baseball shirt red and white

Many have thought about the meeting of Lara Croft and Nathan Drake, although this has never happened. But they have compared the skills of both.

"Indiana Jones" and Nathan came to join on the occasion of the promotion of Uncharted 3.

Of course, with Nathan's great step through the world of video games, we have many options. Nathan Drake in a doll, a replica of his ring … All kinds of options and here are some. 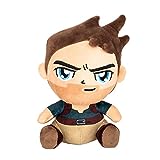 And finally, Nathan Drake and cosplay fit much better than it seems. There are fans who dare to take their look, especially the version of Nathan Drake in Uncharted 4. An amazing cosplay and all kinds of options that we show you below.