Apple invested more than $ 53,000 million in processors in 2020, according to Gartner

Apple invested more than $ 53,000 million in processors in 2020. A figure that This puts you well ahead of the next on the list, Samsung, and third, Huawei, that only by combining their purchasing numbers can they match the Cupertino company. In an age when processors are more important than ever, this is an interesting metric to look at the tech market from another perspective.

11.9% of world production of transformers

According to Gartner figures, Apple has invested a total of 53,600 million in processors, which represents 11.9% of total world production left. Some figures that show 24% growth compared to the previous year

This places both companies in the top 10 for transformer buyers. A list that has not undergone any changes compared to 2019, where each participant retains their place despite an increase of 7.3% year on year. 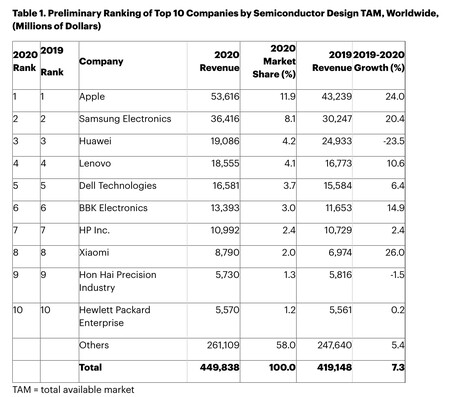 Apple maintained its position as the world’s largest semiconductor customer in 2020, in large part thanks to the continued success of AirPods, special demand for Mac and iPad computers, and increased consumption of NAND flash. “The increased demand for mobile computers and tablets due to working from home has significantly boosted Mac and iPad production through 2020,” said Masatsune Yamaji, research director at Gartner. “The company also began its transition to Apple silicon for its Mac product line in the second half of 2020.”

Apple took 11.9% of the processors manufactured, almost as much as Samsung and Huawei combined, which are in second and third place respectively.

In the table, the spectacular decline of Huawei is particularly striking, which lost 23.5% from 2019 due to restrictions imposed by the United States government. A reduction which, despite everything, allowed it to keep third place and which, without a doubt, mainly benefited Samsung to be able to acquire more processors. In the list, we also see a spectacular 26% growth from Xiaomi, the biggest in the industry, and the respectable increase from Lenovo, which counts 10.6% to be in fourth position.

The tech market and the companies that are part of it have so many facets that we can study it in different ways. Too often we can focus on a certain company’s financial results, admittedly interesting, but perhaps not the only indicator of the company’s performance. Today, with this data in hand, we have a fairly clear picture of industry activity. Of course, we cannot distinguish between the processors that power a computer from those that do the same in wireless headsets, but we see, in short, a standardized and equalized comparison between different companies.