Through the previews of Chromium we found out that Google wants your web browser to be more customizable. The company adds a new shortcut in the address bar which would be suitable for the user’s use.

This is a feature that would reach the stable version of Chromiumas long as they don’t back down with this new shortcut. It wouldn’t be the first time that a Google has canceled a feature they’ve been testing for months, as happened last year with Google Duet, that the bottom navigation bar didn’t come out of its experimental version.

The new address bar shortcut was released in Chrome 92 Beta and its customization options in Chrome 93 Canary, but it still doesn’t work properly, which is to be expected when it comes to builds that are still in development. 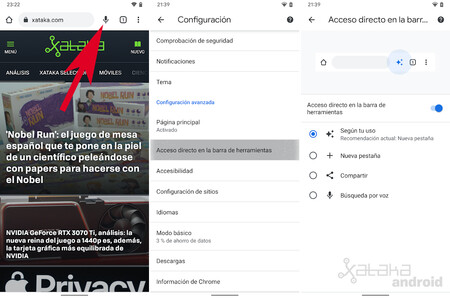 By default this new shortcut will adapt to our use. It will show the action for a new tab, share or voice search depending on which one we use the most while browsing.

In Chrome Canary in Settings> Shortcut in the toolbar It already allows us to activate / deactivate this new shortcut, in addition to being able to select the action that we want it to always display and not depend on our use.

Prime Day Show 2021: Date, performances and how to watch the concert

A New Super Monkey Ball Game Has Been Rated Again, This Time In Brazil

A New Super Monkey Ball Game Has Been Rated Again, This Time In Brazil