No, my 2017 iPad Pro did not fall on the floor and crack the screen. I did not resell it either to buy another more efficient one. what happened to him it’s almost a shame for what I had to use this fabulous tablet. Simply, my iPad Pro has become a tablet for my daughters. And everything indicates that there is no going back.

Children’s music as a discovery… and a lure

when you have children, a lot of things are changing. Despite this, you find others who lend you a hand on a daily basis. And that’s where technology comes in. At home, we’re immersed in the Apple ecosystem, so it’s inevitable that its products and services will play an important role.

Not too long ago I discovered that on Apple Music I had access to an almost unlimited catalog children’s songs and lullabies to fall asleep. I started using them for teach my daughter carmen songs to sing take a bottle when he was a baby. And it worked. He loved to listen to us while he ate.

My monthly Apple Music subscription goes entirely into the pockets of child artists with growing influence in my household.

With the move to a bigger crib and her own bedroom, she had trouble falling asleep. We started using children’s songs again with the volume down so that he can sleep peacefully. And it worked again. When you’re a parent and you find that doing things a certain way has a high success rate, you tend to replicate it in more places and avoid experiments.

Soon we started using the songs at other times of the day. For example, while the little girl was playing with her toys, where we realized that if we played her music, I played more relaxed. As this popular expression says, music tames beasts.

From iPhone to iPad Pro and from there to MacBook Air 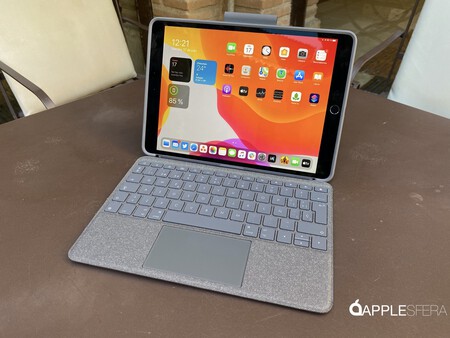 My iPad Pro, from when I used it with a Logitech keyboard to work with.

Over time and the arrival of a little sister, the uses of music for children have multiplied. To the point where my recent reading list has shrunk to a single group: singing game. My wife and I used to joke (and still do) that the monthly Apple Music fee goes almost entirely to the well-known band. “We pay for your children’s college” is a common phrase with me.

Due to manipulate this group, we discover other things about him. They are of Spanish origin, but they already have a model exported across the Atlantic, with Mexico as a preponderant place: same songs, change of accent and singers. It is also striking to note that in the summer, the members of the team they share the tour through cities all over Europe

where kids listen to them in amazement after months or years thinking maybe they were living in mom or dad’s iPhone.

This stand and the ability to remove the keyboard made it extremely easy to transform into a kid’s iPad.

There’s a delicate balance between living in the post-PC era and becoming a kid’s tablet.

And here’s the catch, because as we find more and more uses for children’s music, the more we turned to my iPad Pro. All things considered, it had better speakers and didn’t require me to be without the iPhone for long periods of time, like naps or bedtime.

When we bought a car to go to the suburbs or on vacation, the iPad Pro was given a new role: a tablet to view the drawings during the journey. At the time, my working setup was a 2017 iMac and the iPad Pro of the same year. That’s why I didn’t quite see my iPad performing less than honorable functions than the usual ones of taking notes during client meetings and working on the go.

The “solution” came, without being fully aware of it, from the hand of my MacBook Air M1. Which made my old iPad Pro worse off.

If it’s your destiny, don’t hesitate 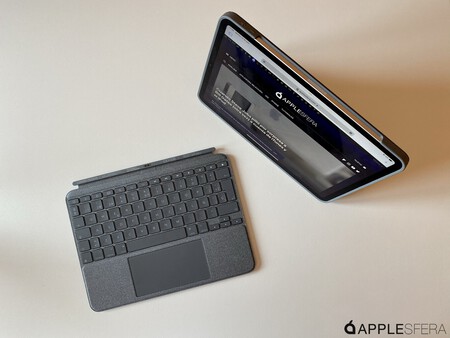 The fate of my trusty iPad Pro, the one with which I wrote so many articles for Applesfera and covered so many meetings, it was sealed by the time the MacBook Air I’m writing from arrived. Freed from its professional shackles, this iPad was able to pursue full time to children’s entertainment (that doesn’t mean it was available for my daughters or used 24/7, mind you). The same Logitech Combo Touch keyboard that allowed me to use it on the go now doubles as a drop guard and flip to keep it upright.

The final blow was when I recognized the role played by this iPad in our house. And therefore, I decided to uninstall all the apps and services I used for work: email accounts, Slack, notifications and a long etcetera. Come to think of it, it probably would have been easier to completely reset the iPad. Maybe it will be one of these days.

Somehow my iPad Pro, which has been by my side for so many years as a squire, he rebuilt his life by finding another purpose. I think of the number of tablets or phones that once they lose the interest or the use of their owners, end up in a drawer, and I feel a certain joy. I wonder what other uses the future holds for it in our family.

This latest generation solid gaming PC with RTX 3070 is well priced and customizable.

Zelda: Twilight Princess HD Dev Would “Love” To Bring The Game To Switch

Zelda: Twilight Princess HD Dev Would "Love" To Bring The Game To Switch