The first estimates of global computer sales for 2020 come now that we are already in a new year. A Canalys report suggests the pandemic has helped accelerate those sales, which Apple has also benefited from. selling approximately 22.6 million computers.

If this Canalys calculation is correct, Apple’s sales increased by 16% compared to last year

when 19.4 million units were sold according to estimates from the same company. Globally and covering all companies, some 297 million computers were sold with growth of 11% year on year. By the way, 79% of all these computers sold were lap tops. 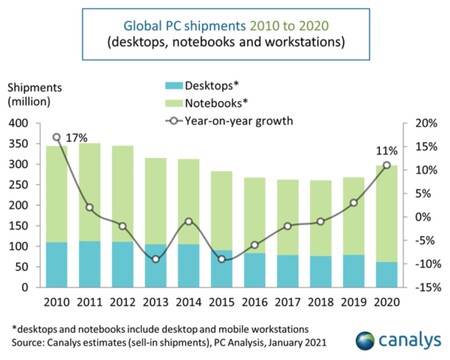 The need for home computers due to lockouts and telecommuting doesn’t appear to have been the only factors contributing to these sales: in the last quarter, sales accelerated for a Christmas that encouraged the purchase of these products.

Despite all of these sales, Apple continues to remain fourth on the list of the world’s top-selling manufacturers with a market share that goes from 7.2% to 7.6%. At the top are Lenovo, HP and Dell, with Lenovo selling almost one in four computers.

Remember: these are only estimates, since Apple stopped providing unit sales figures of its products for a long time, only reporting the revenue obtained. We should see those numbers at the end of the month at the quarterly earnings press conference, which looks pretty good by the way. In addition, the transition to Apple Silicon chips and the upcoming redesign of the iMac and MacBook Pro should further spice up those sales.

Release Candidate for iOS 15.3 and Other Systems Now Available for Developers

The first details of ‘Project Iris’ are leaked

How to embed addresses of friends and family in Google Maps

iOS 14 won’t get updates forever, Apple wants you to update to iOS 15