So you can set up conversations in Google Messages

A few weeks ago it was disclosed that the application of Google Messages This would allow us in the near future to highlight messages and correct conversations. Well, a few days ago he confirmed that this news would arrive in the coming weeks, but the one to set up conversations was the first to arrive.

Through the last Google Messages beta we see that we can set the most important conversations as in WhatsApp. The steps and operation of the Google Messages application are identical.

Like WhatsApp, the Google Messages app now allows us configure up to three conversations. We just need to make sure that we have updated the app to its latest beta so that we can fix our SMS, MMS, and Chat Conversations (RCS) right now.

With the updated app at version 8.3 we just have to mto hold a conversation to activate its action menu then click on the new icon set. We have to define the conversations one by one. It does not allow correcting multiple conversations at the same time. 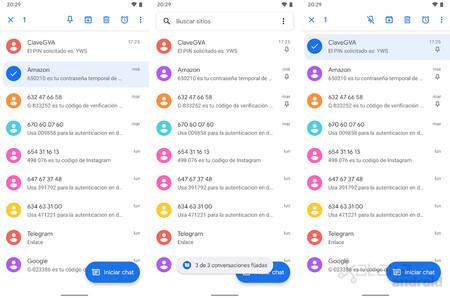 It is expected that in the coming weeks this novelty will reach the world with the ability to highlight messages in a conversation. As can be seen, Google adds the most basic WhatsApp functions to its email client.

The new FIFA 21 Ultimate Team packs will allow us to see their content before buying, but you will have to wait 24 hours before seeing the next one

Between Us: Developers overwhelmed by success and pressure

Between Us: Developers overwhelmed by success and pressure