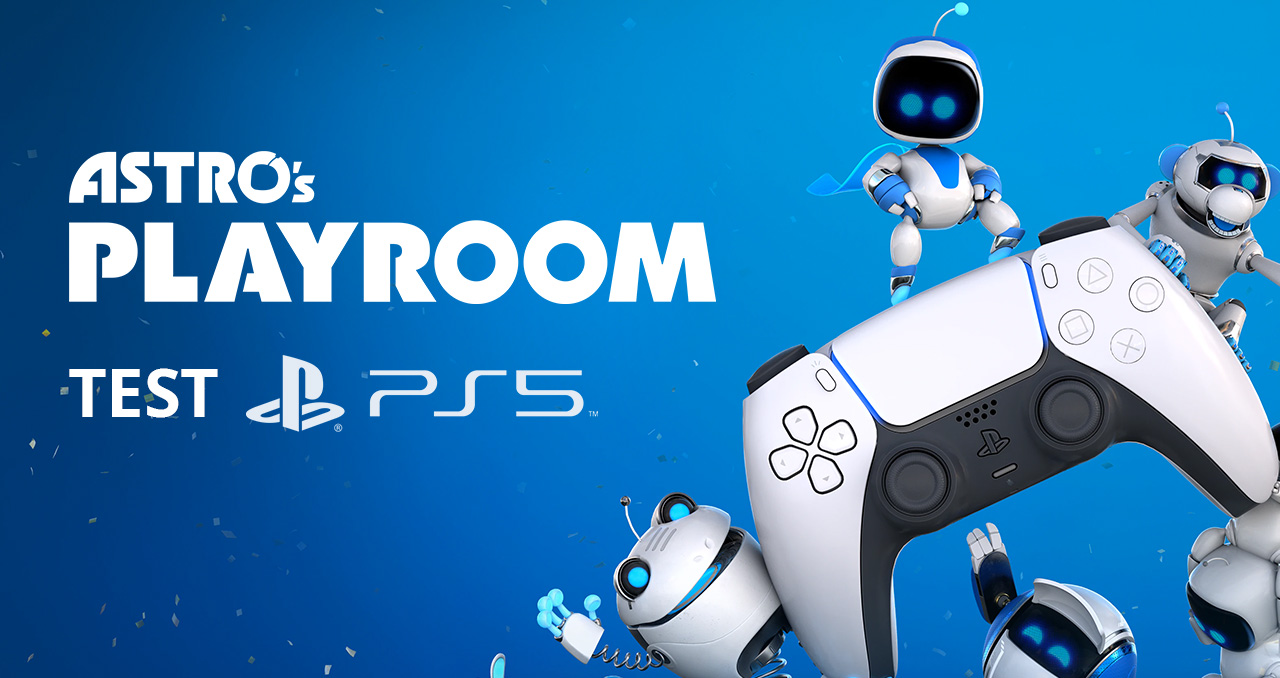 Little boy, the astro-robot makes his way to the PlayStation. After a first appearance in 2013 in The Playroom and a triumphant success in Astros Rescue Mission on PlayStation VR in 2018, the return for new adventures is on PlayStation 5. A technological demonstration of the new DualSense controller, the title of The Asobi team is in fact far from reducing his primary calling.

Forget the DualShock, the artifact of the past …

A first tutorial will allow you to familiarize yourself with the main capacities of the white and black pad clamped by our hands right from the start. These are well used throughout the game. The haptic feedback widely used by Sony in its communication is my eyes (or rather my hands), the most convincing novelty. It only takes a few minutes to understand that going back to “classic” vibration motors will be difficult. These new vibrations are much more precise, better confined to the plot, and offer a lot of variation in intensities and rhythms. Some passages of the game take place in the rain and Astro, undoubtedly not IP67 certified, then takes out an umbrella. I can assure you that you can feel every drop bounce off the umbrella and that the difference between a light rain and a thunderstorm can be felt. When the wind blows from left to right, the vibrations transmit the direction and force of that wind. In short, Sony wasn’t lying.

Another novelty widely used by the Japanese company are the adaptive triggers. Here, too, the result is attractive. In addition to the example of the more or less stretched bowstring, the game includes a machine that distributes bonuses for PS coins (restore them in levels). These bonuses (or collectibles) are encased in a glass ball that must be broken by pressing with the right hand. Halfway through, the glass will resist strong resistance and it is necessary to put real pressure on R2 to break it. Astros Playroom also uses the gyroscope and the touchpad, two functions players are already familiar with. For my part, I still find it imprecise. But the developers have at least tried to incorporate the original phases of the game to help move it forward. Astro can put on armor. One of them turns it into a small twin-engine ship that can be controlled by tilting the joystick to avoid obstacles while collecting collectibles. In another sequence, Astro is spring loaded and can only move if good instructions are given through the gyroscope. Within a few minutes it also turns into a pinball machine that has to be handled with the greatest possible economy with the touchpad. This brings originality to the gameplay.

On the audio side, the controller also embeds some interesting technologies. The speaker is used almost continuously (wind blows, water splashes, footsteps on a metal floor, etc.) and generally works. Apart from that, the sound is of course much less reproduced than that of your TV, home theater or headphones. If you have rear speakers, you will likely find this new device, otherwise it can get a bit of a dip. The built-in microphone in the DualSense is also used as you can blow on it to turn a small propeller and open passages.

A thousand and one twinks of the PlayStation universe

Astro’s Playroom is not satisfied with fully demonstrating the controller, it follows its ideas and is indeed a tribute to the PlayStation brand since its development today. The four worlds that the game offers are actually all components of the PlayStation 5. Judge instead: air conditioning, GPU jungle, SSD circuit and RAM prairie. That way, sometimes the explosion of a GPU fan causes the rope you’re balancing on to wiggle or giant ram sticks to go stiff like two towers in decor. Of course, the bulk of the game jumps from platform to platform eliminating the colorful (and not very resilient) enemies lurking around the area, but the components are heavily emphasized in every part of Astro’s principle.

But that’s not all ! If so many players are trying to get the title 100% complete (or “platinum” as the purists say) it’s because all of the game’s collectibles are so many player memories. There are puzzle pieces everywhere you can use to reconstruct friezes that tell the story of Sony consoles. And we’re particularly looking for artifacts that are machines or accessories that have shaped the past 25 years. The PSP GO? There she is. The EyeToy? Also. The multitap of the PS1? The same. In addition, Sony describes them with humor or even self-irony. Everything you find is then brought together in a kind of muse that tracks your progress and thus the history of the brand. Special mention also for the third and final boss in the game who will overthrow you 25 years ago!

And in the tribute section, of course, we have to mention the staging offered by all of the other robots that populate the levels. Many of them are in fact “disguised” as heroes or heroes who have shaped several generations of gamers. Two robots that are hidden behind a door and watch a zombie are of course Resident Evil. A robot with a red mark on its face arriving on a Drakkar with its son is inevitably god of war! There are dozens of such productions that will always make you smile. 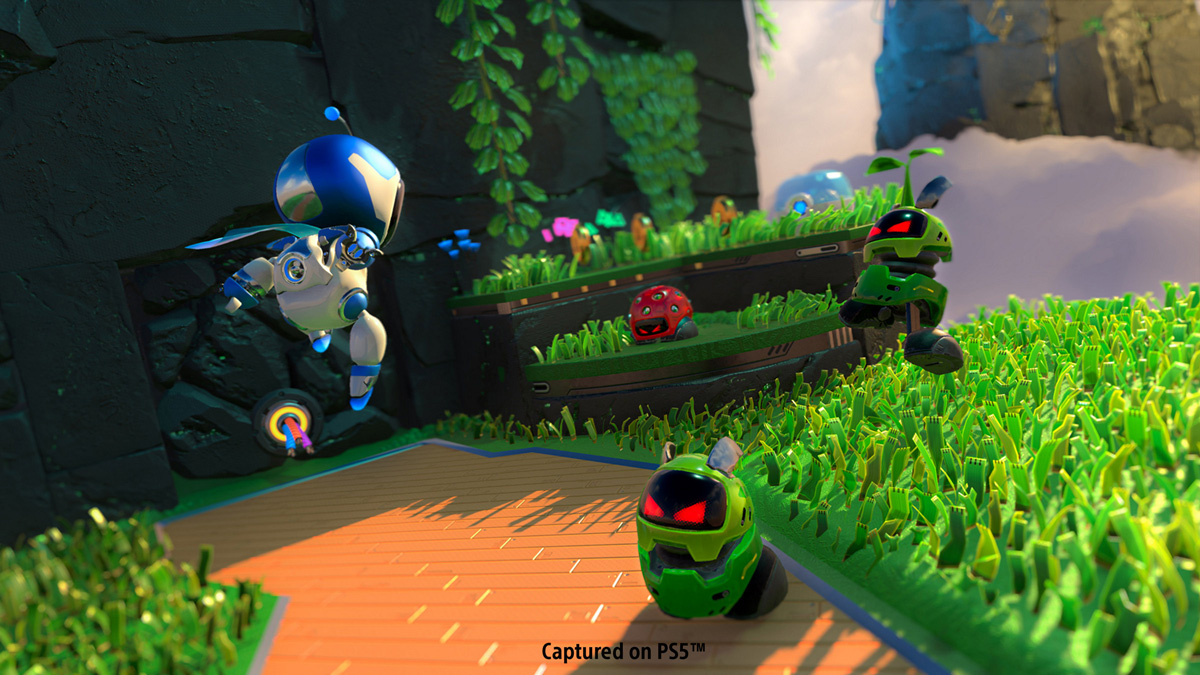 And keep that smile on for three to four hours to finish the game. Quite simply because Astro reacts to the fingers and the eye and you really enjoy controlling it. And in order not to spoil anything, the fluidity is indeed there as the game runs quietly in 4K 60FPS as expected. Of course it’s not the graphic punch, the “system seller”, but it’s still very pleasant for him. Some textures are even specially edited. The reflections on Astro and other reflective surfaces are also convincing. On the sound side, I generally appreciate the sound effects that add to the cute and fun side of the game. The music does a great job without being memorable.

And then we have to remember that this Astro game room comes pre-installed on the console for free. Sony didn’t necessarily take the game as far as its big cartridges (Spider-Man: Miles Morales and Demon’s Soul in particular), and that could be a mistake. Because even if the title is short, we can still say that unlike its competitor, the PS5 is sold as a bundle with a game. It will be interesting to see the strategy Sony will pursue in the future regarding its new license, which has grown in popularity since it first appeared 7 years ago. Astro to compete with Mario? And why not ! 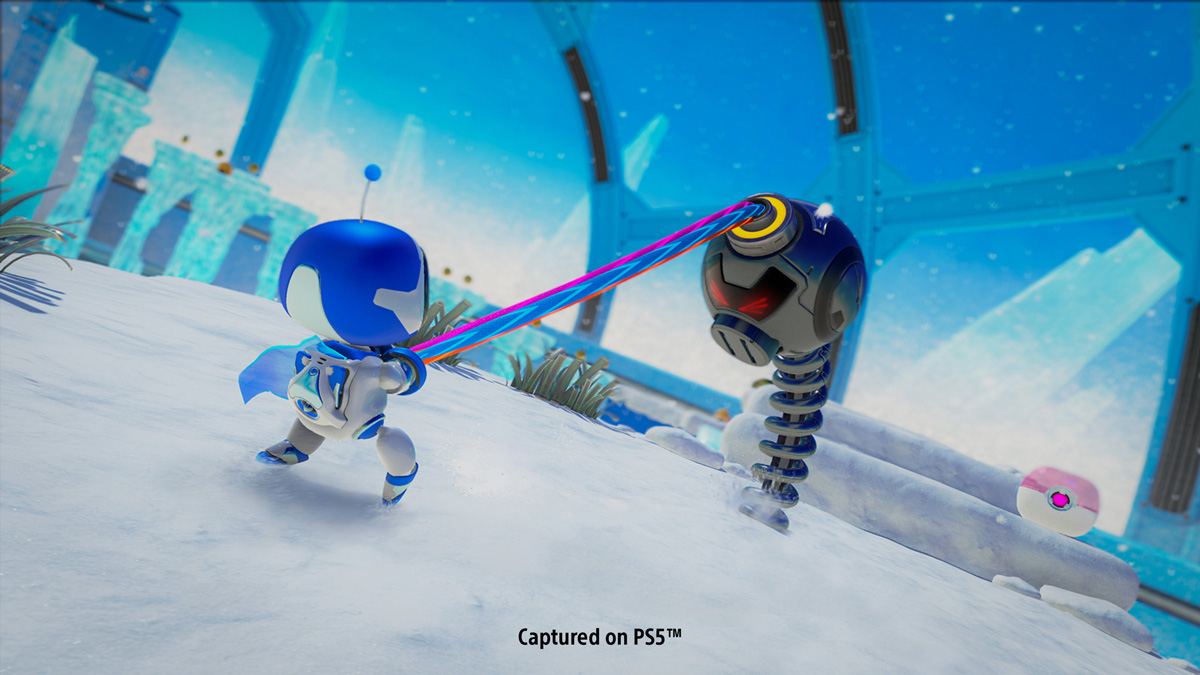 It is not easy to rate Astro’s playroom as it is kindly offered to us. It’s not a cult game, but it’s definitely full of qualities. The best part is certainly its ability to keep us smiling with its very entertaining gameplay that DualSense makes perfect use of, but also its constant homage to 25 years of PlayStation. He is very approachable and the ideal candidate to introduce the video game to his kids (or let them let go of the switch for a couple of hours!). Even if it’s short and too easy and I’ve weathered gyroscopy a few times, we can only let ourselves be seduced by the Asobi team’s platform game. when next?

It’s not over ! Discover the video test!

This is a first. So I’ll start with this first test parallel to the blog in the video The Geek Adventures YouTube channel. I edited with love and made the PC suffer by not compromising: everything is in 4K 60FPS! Of course, I am waiting for your constructive feedback in order to move forward over time. The idea is to continue the tests written here while integrating the video version published on YouTube. If all goes well and I still have days off, the next one will arrive later this month!