I have returned to Magic 20 years after having a card in my hands, and it is being a much more special return than I expected

Like someone who suffers an age crisis and decides to buy a motorcycle, various events in recent months have led me to try to recover a bit of that youth that escapes year after year. Review old movies, go back to skating, recover lost contacts, and all in all, go back to Magic: The Gathering.

The thing comes from a few weeks ago, when an old ex wrote me with one of those messages that you don’t see coming. He said that in his last move he had found something that would make me very excited and, between my infinite curiosity and my irremediable impatience, I soon approached to see what it was about.

The mystery lasted as long as it took me to see what he had in his hands. Despite going years without seeing it – or even remembering it – he would have recognized that box anywhere. One of those pieces of wood that had spent the longest time acting like a child’s treasure chest that as the purpose for which it was conceived -the wrapping of some leather wallet given to my father in his day-.

I could not say when it came into my hands or what was in it once, but I did not need to open it to know what had been hidden inside for more than two decades

. Among the tangible there would be angels, the mythical chickens and mercenaries, many mercenaries. Among the ethereal, a collection of memories of those that pride themselves on having the same efficiency to draw smiles as tears.

A box full of magic

It’s amazing how some things stay hidden in your head without making too much noise until life hits the right notes. I would lack hands and feet to count the times I have heard or read the name of Magic: The Gathering, but somehow that spark of nostalgia and explosion of memories that they had locked up more than 20 years they only went off when they saw that box.

Even more curious is that, in reality, I was never a big fan of the game of Wizards of the Coast. I’ll tell you more, those letters weren’t even mine. They were the gift of one of those friends who unfortunately get lost along the way. The genius of everything movable at that time who taught me to skate and fought with blood, sweat and tears to introduce me to another of his favorite hobbies, magic cards.

Caught in one of those moments – now embarrassing – in which testosterone was pulling more than friends, his last desperate attempt was give me the decks that he no longer used to learn how to play and, hopefully, end up just as hooked as he was. 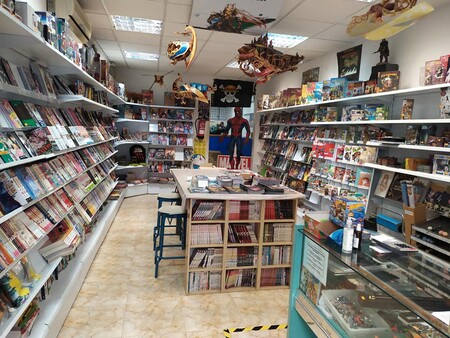 In this store I spent a lot more money than I would like to admit.

There was no luck and, although I know that he grew up enough as a player of Magic -until reaching world tournaments abroad-, my last memory of a complete game belongs to the table of the typical 90s neighborhood establishment. One of those places where you can guess its smell even if you’ve never set foot on it, where we used to go looking for comics and geeks to spend our weekly pay on.

How to travel to the past: step 1

In one of those twists of fate that make us believe in him even to those of us who only see mere coincidences everywhere, a few days ago Alex -director of this holy page and a friend of whom I hope the wind is not carried away- told me about the possibility to talk about Magic

from the perspective of those who start from scratch.

Frankly, it seemed too fortuitous to pass up, but I told him that if he did, I wanted it to be something special. I wanted to go back in time, try to recover everything that I lost in one way or another at that time, and share it with those who are willing to follow him week after week. 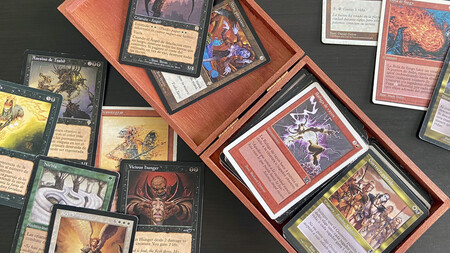 Few things more beautiful than the art of a Magic card.

Go back to those games, step back into that store, teach my children to play, meet that friend again, learn to play at the level he reached, talk about our past and catch up on our present with some Magic cards as an excuse. Going back to one of those times that only a disease would be able to erase, and picking up those paths right where I left them.

Every Wednesday at the same time -among other surprises that are on the way- I will open the doors to a little bit of my yesterday and I will tell you how that of becoming a good player of Magic. To be able to face that friend and whoever gets ahead (help and advice are allowed).

This one that you find here is, broadly speaking, the first step in that long and fun journey.

Dazzled by the art of each of the letters, and outlining a smile every time I pass through one of the ones that I especially liked in the past, I can’t help but have the feeling that I remembered the letters of Magic much bigger. Now they seem tiny in my hands. 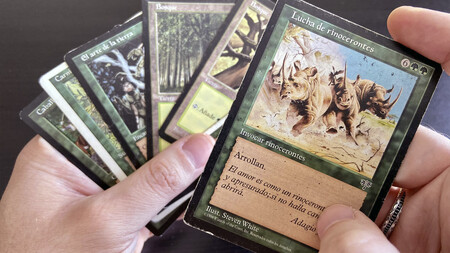 The battered letters that will make collectors cry.

As I go through them, my head begins to assimilate concepts. Not because i remember how it was played -I could hardly tell you how the mercenary deck worked, only that I liked having dozens of bugs on the table-, but because of what I have been scratching from other card games in recent years.

The idea of ​​lowering lands and spinning creatures comes back to my mind, but I would be unable to remember how a deck was formed, how many mana cards are the right ones, or what balance between critters and spells I should follow.

Intercept, summon sickness, first strike, trample, block … Concepts that I either vaguely remember or can guess what effect they have, but that I hardly know how to put into practice at this time. I have to put the batteries. 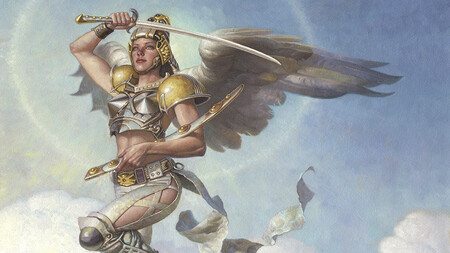 One thinks that, remembering having won a game, and I think the last one I played was one in which my friend probably let me win – as a good troll I retired from the game at that moment – this is going to be easier than usual. which it really is.

But it is clear that being ready is not going to solve anything and that, if I really want to play seriously again, I have to start from scratch. Luckily I know exactly where to look, so among the files of Magic and YouTube begin to assimilate concepts like what color to use, and I refresh the fundamentals for learning to play.

Seven cards, 20 life -I would have said 30-, draw before playing a card, turn the mana to use it -on that one would also have fallen-, block without turning to avoid damage … In just over five minutes I already know how it works The thing and the only thing that scares me a bit is to what extent the powers of the cards have changed with the passage of time.

There is only one way to find out, so I go back to the web and download MTG Arena to try to understand what I have missed and play my first few games. From the outset the new letters seem precious to me, now it remains to be seen how are we doing this. In seven days I’ll tell you.

an entertaining platform game in space

an entertaining platform game in space