if multiplayer conquered you, get ready for the campaign

The Master Chief only needs one bullet to take on an entire army, and the time has come to pull the trigger: 343 Industries has just released the Halo Infinite Campaign Launch Trailer and what is shown in its two and a half minutes is pure dynamite.

Under the promise of offering the largest version of Halo ever

, the legendary Spartan returns delivering bullets, explosions and high-octane action as a prelude of the most anticipated game of the new Xbox stage. And, yes, amid so much chaos and chaos there is room for small threads of history that will be featured in your campaign.

A long-awaited return that will round out the value of its multiplayer, the spearhead of Xbox Game Studios, as well as Microsoft’s own Game Pass. Because the campaign of Halo Infinite

It is included in the subscriptions of Xbox and PC consoles and if you also have Game Pass Ultimate you can play it in the cloud through Xbox Cloud Gaming.

The next game candidate of the year? We will soon draw our own conclusions. The campaign of Halo Infinite

Will play from 7:00 p.m. (Spanish time) on December 8 on PC and consoles, and that will be just the beginning: from 2022 will arrive the cooperative options and the forge mode. For now, we leave you with the hours in which you can start playing worldwide. 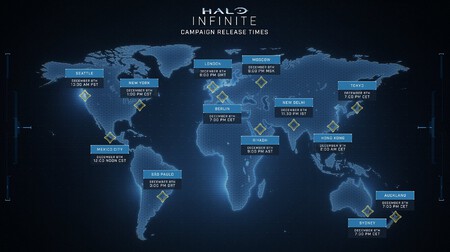 The countdown to Halo Infinite It’s started and you have eight days to sharpen your aim and get the hang of the hook in multiplayer. Let the Outcasts prepare!

Fall Guys is not coming to the Nintendo Switch in 2021, more info next year

Fortnite players on iOS can no longer spend their V-bucks

new box office record of all time, but it still disappoints

Not even Star Wars can compete with that now

Fall Guys is not coming to the Nintendo Switch in 2021, more info next year