Power Stone, Capcom’s spectacular and chaotic brawler in which the riot is guaranteed to four players

Admittedly, during the twilight of the arcades, Capcom had a master touch – and very distinctive – when it came to making fighting arcades. They were not only exciting, but also brilliantly chaotic. From the delusional Rival Schools to sus crossovers with Marvel O SNK. Power Stone It is among the best on its own merits, but it also reaches another great milestone: make every fight a party.

Despite the similarities and commonalities of Capcom’s fighting games, each of these were cut by a different pattern. Y Power Stone was one of the most unique: that brawler in 3D scenarios radically broke with the successful wake of Street Fighter II, offering the player a blessed madness that is enjoyed more and better in a sequel in which the four-player riot was guaranteed.

Released in February 1999, Power Stone it was closer to the newly released Super Smash Bros. that of the countless derivatives, clones and substitutes of the World Warriors of a Capcom that, together with SNK, the titans of the Osaka fight, continued to bet heavily on the 2D fight. So what Tekken, Virtua Fighter O Dead or Alive they had already established a new chair. Yes indeed, Edward Falcon and company knew how to go off on a tangent in the face of everything seen, contributing new ideas to one-on-one battles.

The way to achieve it? Although the charisma and the presence in combat of the characters is unquestionable, the way of embracing the three-dimensional fight through isometric, colorful and terribly interactive scenarios made a difference. Offering the player a hilarious and very interesting free movement system and, in the process, lots of weapons that gave an extra emotion to each game. 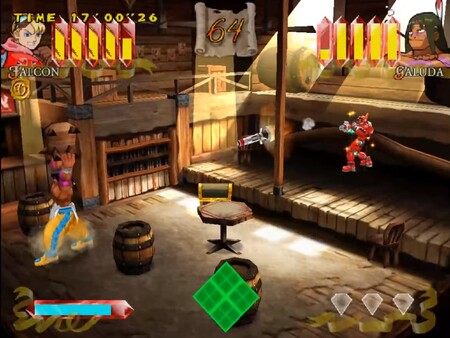 Perhaps, the playable nature of Power Stone and its own strengths keep it from being a competitive title, but it is beyond doubt that it made up for it by making each game equally exciting and fun. Both in the arcades and in the magnificent and impeccable conversion to DreamCast thanks to Capcom’s commitment to the SEGA NAOMI arcade board. A triple success.

Robots, Samurai, Pilots and Pirates: this is the crazy 19th century Capcom style 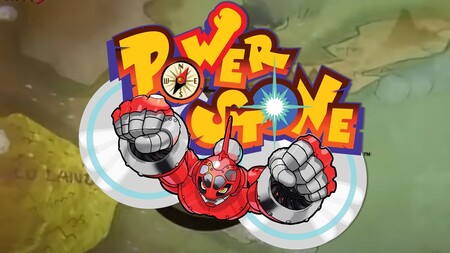 In an age when exploration, science, and adventure were laced with the exotic charm of ancient legends, a fearless new generation of heroes part in search of the Power Stones, seven mystical gems capable of fulfilling the wishes of the one who gathers them. Only a hero can take over the Power Stones, but all are willing to gamble what they already have in combat.

Capcom takes us to its own version of the 19th century, a fantastic time to gather a colorful group of protagonists with fantasy overtones, blatantly archetypal clothes and successful retro-futuristic details among which we find a British pilot, a strict samurai, an exotic fortune teller, a Dancer with kunoichi skills, an imposing Native American and a whole range of personalities. 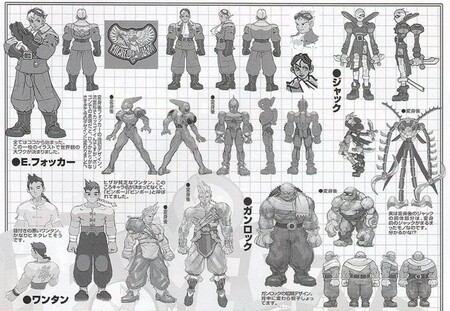 After all Power Stone It is a joyful, romantic reimagining with a carefree anime aesthetic of a historical period that not only lends itself well to adventure, but also knows how to display with a very well caricatured charm the very different civilizations that existed at that time. And, in the process, it shines by integrating with great success the set of elements in the game mechanics.

In the Power Stone original isometric settings and the interactivity they offer have as much prominence as the fighters themselves: during the fights the fighters must make use of everything that appears on the screen, from the furniture to all kinds of weapons that appear out of nowhere, to knock down the rival. So when a very powerful weapon appears, the priorities of each fighter evolve to take it first or desperately try to escape once collected. 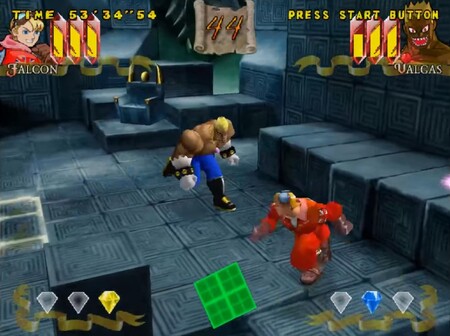 This implicit breakdown of the balance between fighters based on random elements and a very well implemented three-dimensional mobility finds its most exciting point with the appearance of the Power Stones, the gems that give the game its name and that, in case of being able to collect three of They will provoke in our character a unique transformation capable of turning any situation around, no matter how complicated it may be.

In the playable, Power Stone beautifully inherits the sensations of arcade games with fast, fluid and very easy to understand fights. With its own layers of depth and strategy, of course, but always at the service of fun and surprise. Especially, in a second installment in which the original formula doubles the level of insanity: Power Stone 2 Go from single combat to four-fighter battles. 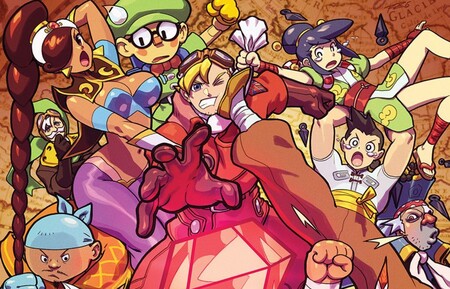 Barely a year had passed since Power Stone It gave the alternative to the entire genre of fighting games when a new numbered installment landed in the arcade and DreamCast. Yes indeed, a full-blown sequel: In addition to adding six new characters, there are more modes, more objects and the stages are larger and much more interactive.

The best part is that all those changes had a brilliant purpose: Capcom allowed up to four fighters participated in the same combat. If he Power Stone was based on the premise of move wherever you want, grab the first thing you have on hand and knock down your opponent, the spectacle that is generated in the sequel drastically elevates all the successes of the original premise and, in the process, challenges us by integrating with two colossal final Bosses. 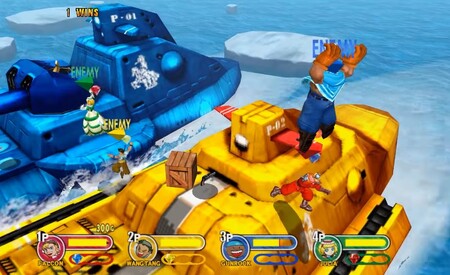 Although it is true that the number of traditional stages had been reduced, the variety and possibilities of all of them had multiplied. In addition, new types of levels were incorporated in the service of the new modes Original Y Adventure, offering the classic experience through combat 1-on-1 Y Arcade.

Special mention to Adventure mode, a succession of battles in which our progress and successes translated into money that we could exchange in the game’s own store for new items and even make combinations. Generously extending the life of the game based on unlockables and constantly giving excuses to get into new brawls and unleash chaos and destruction. 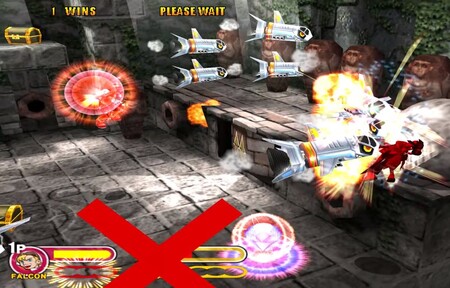 As we discussed at the beginning, with the arrival of DreamCast on the shelves, Capcom gradually decided to stop betting on its own plates (the CPS2 and the CPS3) and to jump to a SEGA NAOMI that gave a spectacular game when it came to moving 3D and integrate 2D content.

Thanks to this, the conversions of Marvel vs. Capcom 2

Y SNK vs. Capcom reached the domestic format in record time, and the case of the two installments of Power Stone for DreamCast it was also flawless in terms of conversion time and results. That the SEGA console also had four input ports was an additional plus that made Power Stone 2 It is an almost obligatory purchase if you already had four controls.

Power Stone beyond arcades and consoles 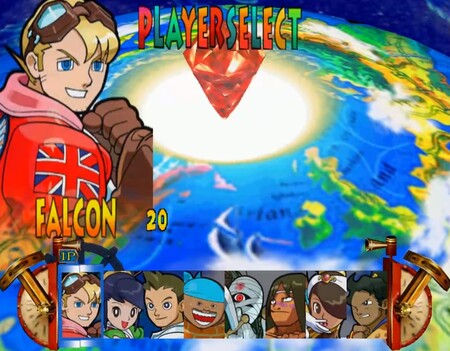 The turn of the millennium was a transitional period in which Capcom shifted much of its attention to arcades and increasingly focused on developing blockbusters for consoles and PCs. The brutal success of Resident Evil and the possibilities of DreamCast and PS2 supported that decision while its star sagas, such as Street Fighter, Mega Man O Ghosts ‘n Goblins they went into a kind of hibernation. And what happened to Power Stone?

Despite being a new saga created for recreational and DreamCast, those from Osaka knew how to dress their characters and the game universe very well: in addition to domestic conversions and all kinds of merchandising, an official manga was produced and even a 26 episode anime series animated by Studio Pierrot. Nothing less.

The first broadcast of the television series, of a single season, took place in the Japanese country between the launch of the two games (between April and September 1999) and was later located and distributed internationally, reaching 6 DVDs. Unfortunately, the adventures of Edward Falcon and company will conclude with the sequel and SEGA’s inevitable withdrawal from the console business.

Not that Capcom didn’t trust Power Stone. In fact, in 2006 he will publish Power Stone Collection, an update of the two installments for the Sony PSP in which the functionalities of DreamCast memory cards (the sensational VMU mini-consoles) were lost in favor of new content, more objects and even access to fighters who until then they were not selectable.

Which does not mean that, in a very justified way, Capcom’s attention was more focused on other more ambitious, delicate and demanded experiences by the general public and the new generation of players. the popularity of sagas like Monster Hunter O Devil May Cry had exploded, that of Resident Evil continued to rise and series like Onimusha or the mythical Okami they required special attention.

Will we see a Power Stone 3? Well, it is not ruled out. Capcom intends to resurrect many of your key licenses and Takeshi Tezuka, creator of the saga, already said in statements to The Guardian in 2019 that he wanted to retake it and that Nintendo Switch lent itself wonderfully to a new installment. 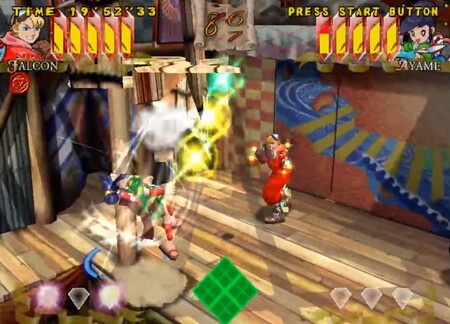 We don’t know what the future holds, but the pieces align. Now what Capcom is inspired, has an especially good streak in terms of shooting and is especially nostalgic with his most beloved sagas, it’s the perfect time to resume those crazy four-command battles. Or four Joy Cons.

This is how all bosses look in Zelda: Skyward Sword HD – iGamesNews