“Android wins the game” and all mobiles must be sold in Europe with USB-C from 2024, including the iPhone

Having a single charging port simplifies things infinitely when it comes to getting cables or chargers of all kinds, although we still have to adapt to the different speeds if what we are looking for is a type of fast charging. But unification smells good, and Android experienced it in its own flesh when it finally ditched a microUSB port that haunted the system for years. Today, the norm is that everything comes with USB-CBut this does not happen with all brands. While Android has always gone for USB, the iPhone has gone for proprietary ports.

So much so that in Europe they have been drafting new legislation for several years which makes it possible to oblige manufacturers to unify the port, and they have finally carried it out. The European Parliament has set a date for the obligation to include this port in all telephones sold on the Old Continent. The resolution will be formally adopted shortly and, after two years, it will come into force in the fall of 2024. Also for iPhones.

E-waste in the spotlight

Standardizing the charging port for mobile phones, at least for those sold in Europe, is something the European Parliament has been pursuing for years, arguing that this would reduce the volume of electronic waste generated on the mainland each year. Something that was already softened in some way when the charging cables were separated from the chargers, but will now also affect the cell phone port itself.

Europe doesn’t like that there is still a model with a microUSB port on the market, but He also doesn’t like that the iPhone’s Lightning port exists.. This is why Parliament will by law oblige all manufacturers to adapt to the new USB-C port and will not allow the use of adapters. Any USB-C cable should work with any phone. And also for any Kindle, smart speaker, laptop, etc. 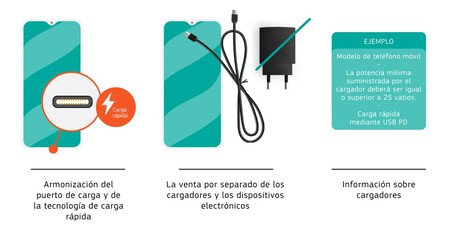 So just like Apple has equipped its iPad Pro with a USB-C port, you will soon have to do it with the rest of your devices. At least if you want to continue selling them in Europe around the year 2024, when the iPhone 16 should arrive. This rumor has indeed been circulating for some time and mentions the iPhone 15 (or even the iPhone 14) as the latest to have a lightning charging port.

In addition to the unification of loading ports, the European Parliament made more deals related to this waste disposal: