We’ve been around with rumors for a long time about the arrival of blood sugar monitoring on the Apple Watch. So far, however, they’ve been basically just that: rumors, but A recent survey of Apple Watch users suggests something else.

A survey that gives clues about the interests of the company

The survey, collected by 9to5mac, comes from a Brazilian Apple Watch user. According to the media outlet, the said user received the survey in an email from Apple to gather comments on his experience with the Apple Watch.

Investigation discusses various health-related topics, one of the main pillars of the Apple Watch reason, and questions the options that the watch offers natively, such as step tracking, activity tones, etc. The questionnaire then asks questions about third-party applications, mentioning, as seen in the image below, blood sugar measurement. 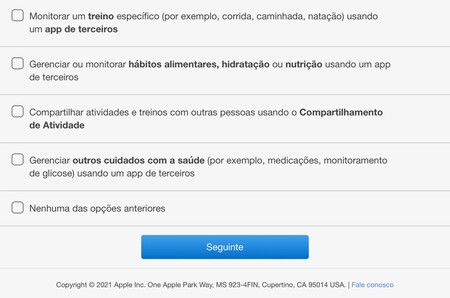 On the one hand, the fact that Apple includes this question in a survey may seem irrelevant. On the other hand, we must keep in mind how Apple questioned in an investigation about the possibility of removing the charger from the iPhone box before completing this step or on Face ID before authorizing the unlocking of the phone with the Apple Watch.

It is clear that these surveys are an important source of information for the company. It’s not completely clear to what extent the responses guide the development of new functions or features, especially considering that many of them take years of development, but they do. reflect the interests of the Cupertino teams

A measure that arouses the interest of a large part of the users and, judging by the survey, of Apple itself.

This investigation alone would likely have gone unnoticed, but its coming amid rumors of Apple Watch blood sugar monitoring at a time when we are months away from launching new watches is interesting to say the least. We’ll see what all this movement is, but more than wondering if we’ll see blood sugar monitoring on the Apple Watch, the question should be when will we see her

It is clear that developing a feature of this project takes years of dedication and testing. But it is also clear that the potential it has for a large part of the population goes far beyond what one can imagine. Recent comments on some of Applesfera’s articles on the subject reveal great interest in a feature that seems so simple and at the same time so important. As Tim Cook commented in a recent interview, “Apple’s greatest contribution to humanity will be in health.” It is clear that the question of this questionnaire goes exactly in this direction.