A few days ago we saw the details of the Vivo Y30 Standard Edition, a phone for the mid-range of the Asian manufacturer who could soon have some company in the catalog, at least if we pay attention to the clues that Google Play Console leaves us, the link that unites applications / developers and users.

Thanks to her, we had access to a new model of the brand like the Vivo Y31

. A terminal with no release date at the moment, of which we already know several of its main specifications and features. We are talking about screen and design, but also about the processor. 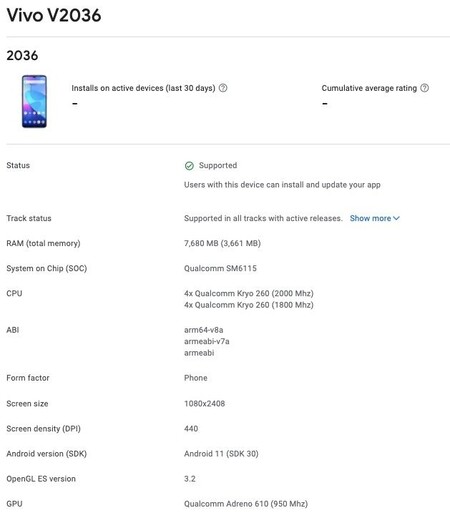 And the first thing we find is an image of the front of the future device. A front part with the already usual screen that covers the entirety and is interrupted only by a front camera in the shape of a drop of water in the upper central area. Three frames, two on the sides and the upper one, reduced, as well as a lower one with a little more thickness.

The Vivo Y31 has what appear to be the volume up and down buttons on the left side, while the power button is on the right side of the device alongside another button of unknown utility. . At the top, an indentation which is surely the 3.5mm headphone jack

And now it’s time to talk about the interior of the Vivo Y31. This terminal uses a processor Qualcomm Snapdragon 662 Octa core supported by 4GB RAM to run Android 11, the version that seems to hit the market.

A terminal already certified by different entities, which suggests the one whose launch is perhaps already very close on the calendar, we will therefore be attentive to any news that may arise in this regard.

Vivo Y31: the design and some specifications of the future mid-range Vivo are filtered

Minecraft: 14 million and a scandal – news

Minecraft: 14 million and a scandal - news