the latest news of Android 13

A few weeks ago the leaks of mysterious mentions in the Android 13 code began which referred to a new smart mobile unlock. Now the latest version of Google services (Via Mishaal Rahman) finally removes virtually all the unknowns of what Google is preparing for the next version of the operating system.

The function is called Nearby Unlock (or nearly unlocked) and will unlock the phone using a Wear OS smartwatch. It is a concept similar to smart lock which has been on Android for many years, but goes one step further when it comes to security.

The smartwatch unlocks your mobile securely

Smart Lock is one of those Android features that’s so hidden away that it’s practically a miracle anyone knows about it. Buried in the security options of the mobile, with Smart Lock you can keep the mobile unlocked in three cases: while you wear it, while you are in trusted places and when connected to a trusted device.

Smart Lock hasn’t changed much for seven years now, but Google is readying what appears to be its secure successor. It will be called Nearby Unlock and it’s the same concept as the trusted Smart Lock device, but more secure. The multiple mentions of the system in the code of Android 13 and version 22.24.13 of Google services make it very clear what we can expect from it. new smart unlock

The new function will come from the hand of the Google Pixel Watch and, in fact, the one that will be mentioned Google’s first smartwatch in Near Unlock’s own internal descriptions. However, it wouldn’t be unreasonable to assume that Nearby Unlock is compatible with other Wear OS smartwatches.

On the filtered information screen, it is detailed that with nearby unlock you will be able to unlock your mobile securely using your smartwatch

, which must also be unlocked and close to the mobile. After unlocking it, the mobile remains unlocked as long as you wear the smartwatch. Google mentions that Nearby Unlock is useful in cases where you want to access mobile notifications and at that time it doesn’t recognize your fingerprint or face. 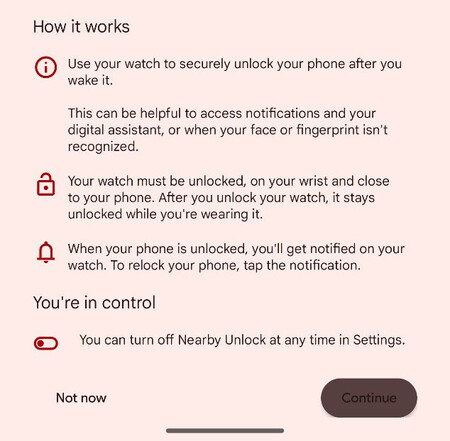 Interestingly, the function It will also allow us to block the mobile of the smartwatch. When the mobile is unlocked, we will receive a notification on the watch so that we can lock it again with a simple press. Its approach is similar to that of Smart Lock, but more complex. Smart Lock is simply based on connected devices and, for example, does not distinguish whether the device is locked or not, nor does it allow you to interact and/or lock.