triple camera, MediaTek brain and 120 Hz screen, among its features

Currently, Xiaomi Mi 11 Family It is made up of several models: first we have the Xiaomi Mi 11, on a rung above we find the Mi 11 Ultra and on a rung below the Mi 11i and Mi 11 Lite (the latter, in 4G and 5G variants). Well, judging by the latest rumors, it looks like a new member will be joining them soon.

We are talking about the Xiaomi Mi 11T, which in China could arrive under the name of Redmi K40 Ultra. This future terminal will succeed the Xiaomi Mi 10T that we met last year and, obviously, it will improve some of its features. The big news, however, is that Xiaomi will opt for a MediaTek processor

and, oddly enough, that will lower the screen refresh rate to 120Hz. Depending on the leaks, of course.

Step back on the screen, turn on the processor 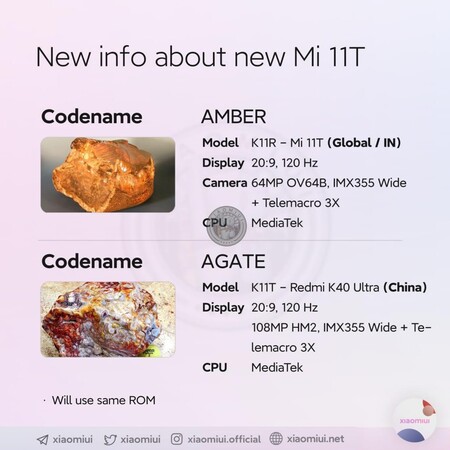 On this occasion, the leak comes from XiaomiUI, known leaker of the Xiaomi universe, which ensures that the future Mi 11T bears the code name Amber and the model number K11R. In addition, it ensures that you will have a screen with an aspect ratio of 20: 9 and a refresh rate of 120 Hz, which would be a step back from the previous generation if we consider that the Mi 10T has an adaptive 144 Hz screen.

However, it is possible that Xiaomi decides to replace the LCD panel of the Mi 10T with an OLED panel in its successor. We would have another big change in the processor, as the leak talks about a MediaTek chipset; does not specify the model, but it could be Dimensity 1200. Recall that the Mi 10 T and the other models of the Mi 11 series mount Qualcomm Snapdragon processors.

In the photographic section, the Mi 11T would include a triple rear camera with a 64-megapixel main sensor made by OmniVision, with Sony IMX355 8MP wide angle and 3x tele macro zoom. To confirm these specifications and know the rest of the benefits (including memories and battery) we will have to wait for the official presentation of the phone, which is expected in October.

The leak further suggests that the Mi 11T will land in China under the name Redmi K40 Ultra, although it is now identified by the code name Agate and the model number K11T. While this Chinese variant is expected to share screen features with the Mi 11T and also mount a MediaTek SoC, it will include a more advanced camera with a 108-megapixel HM2 main sensor.