will be based on veteran K-9 Mail

Mozilla Thunderbird is one of the most popular email clientsavailable to download on Windows, Mac and Linux, although last month we were surprised that a mobile version was on the way, and soon.

We didn’t know much about Thunderbird for mobile, its appearance or possible functions, until now when the app’s plan to make the leap to mobile was announced: will be based on the veteran K-9 Mail appan open source email client with over 5 million downloads on Google Play and now owned by Mozilla.

Thunderbird for Android will be the K-9 of the future

What do Mozilla Thunderbird and K-9 Mail have in common? Besides being open source messaging apps, they are both extremely durable apps. Mozilla Thunderbird was released in 2004, while K-9 Mail followed five years later in 2009. That’s a combined 31 years of experience with email clients.

The difference is that Thunderbird ignores mobile for decades, while K-9 Mail was launched as one of the first third-party email clients for Android. Now their paths cross after the K-9 Mail development team announced that they are joining the Mozilla Thunderbird project to turn the app into the first mobile version of Thunderbird. 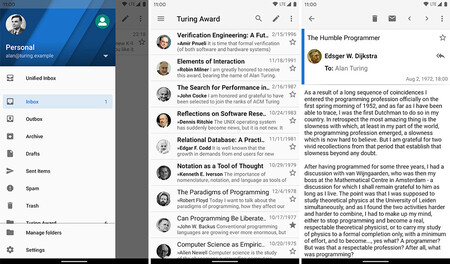 According to the K-9 blog, talks between K-9 and Mozilla began in 2018. Now, K-9 belongs to Mozilla so that donations to K-9 go to the Mozilla Foundation. At least part of the K-9 team has been hired by Thunderbird to continue development of the future email client.

K-9 Mail will gradually transform into the future Thunderbird for mobile, including new features such as configuration with a Thunderbird account, improved folder management, message filters, synchronization between mobile and PC and more. new features. When the modernization of K-9 Mail – which begins to be felt over the years – reaches an acceptable level, K-9 will be renamed Thunderbird for Android. Existing K-9 Mail users will be able to follow the app as it is now while this “update” takes place, which at this time we don’t know how long it will last.