the The iPhone is the undisputed king of the premium range smartphones in the world in 2021. This is confirmed by the study recently published by Counterpoint Research, which provides the most interesting figures and data. Among other things, that the premium segment is at its highest or that 5G is close to representing 100% of this range.

Apple is on the right track in the so-called premium range of smartphones, which is defined as that whose sale price exceeds $400. This means that all iPhone models fall into this segment except for the iPhone SE 2020, which had a base price of $399. The 2022 iPhone SE costs $429, but was released outside of the review period.

Evolution of world market shares in the >$400 segment.

As you can see, the iPhone has gone from 55% dominance in this range, to 60%. And this at the expense of Samsung and Huawei, the two biggest losers in the segment. In the case of Apple, from Counterpoint, they explain that this is due to the “update of 5G models such as the iPhone 12 and iPhone 13”. They also indicate that the delay of the 2020 launch pushed some of the demand to 2021. China and the fall of Huawei ended up pushing the iPhone around the world.

Xiaomi, OPPO and Vivo are also the other winners of this classification. In the case of the first, its improvement is due to the Xiaomi Mi 11. For the others, the reasons of the analyst firm are the brand change from Reno and the Realme X50 and Vivo X60 ranges.

Apple dominates all regions of the world 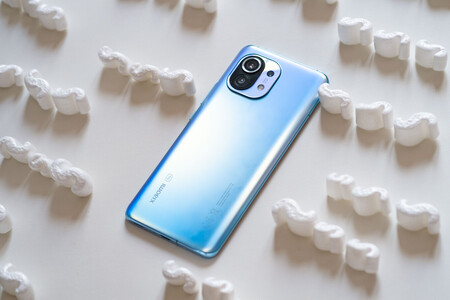 Counterpoint has divided the world into 8 regions, assigning each up to five manufacturers based on your sales. The result is the graph below, of global sales of the premium segment in 2021:

The first thing that stands out is that Apple dominates in each of them with the first place. Including China and India, the latter being a surprise after all the obstacles that they had to overcome from Cupertino to be present in the country. An effort that allowed it to double its sales in India at the end of 2020. 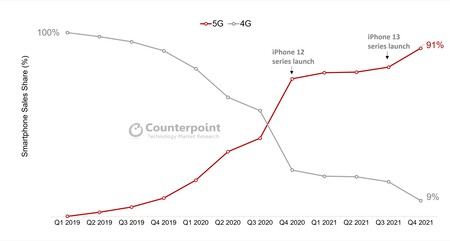 It should also be noted that Samsung takes second place in almost all regions. China being the big absent market, because the Koreans abandoned it a few years ago. Third, fourth and fifth place are disputed between Xiaomi, Huawei, Vivo, OPPO and even Motorola.

Finally, the analysis they make of the penetration of 5G compared to 4G is interesting. When the iPhone 12 arrives, 5G would represent around 65% of the total. After its introduction and the presentation of the iPhone 13 a year later, it allowed this segment to reach 91%. The premium segment has almost completed the transition to the new connectivity standard.