Two “Apple Watch” to do an ECG, that’s what Apple investigated before launching the Apple Watch Series 4

We often look to the patents that Apple obtains to find out what interests it. As we always say, however, the most reliable information that patents provide us with are areas of interest rather than the final execution of a process or the implementation of a system. Proof of this is the patent that concerns us, which, unlike many others, Let’s celebrate that it didn’t materialize.

In September 2018, Apple introduced the Apple Watch Series 4 and surprised us all with the ability to take an ECG directly from our watch. What we know now is that this clean implementation that we currently enjoy this was not the only one who came up among the engineering teams of Cupertino

According to the “Portable EKG Device” patent, Apple was planning or researching to bring the ECG to the Apple Watch in a very different way. The key was that the ECG needed two different points of contact with the body in two separate sections, preferably leaving the heart in the middle.

Apple plans to address this requirement by using a second sensor in the form of an arm strap. This second sensor would communicate with the Apple Watch and provide this second data source, since, being close to the heart, its signals could be measured remote electrical appliances. 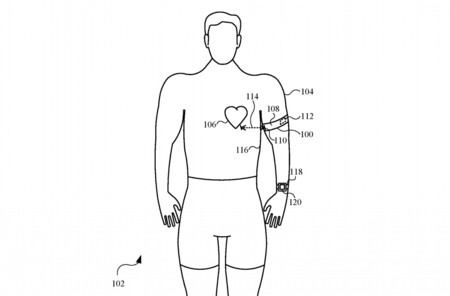 Another proposed system consisted of something resembling a second Apple Watch on the upper arm. A sensor that was in contact with the skin could measure its electrical signals and, after comparing them to those provided by the Apple Watch on the wrist, offer us a measurement.

It is clear that having to wear a second device on the body to perform an ECG is not at all comfortable. So much so that this feature would have been relegated to people who really need to be aware of their hearts. divert its adoption from the general public. Lucky for everyone, Apple had a small but brilliant idea.

This is the implementation that Apple finally presented with the Apple Watch Series 4. A system in which the lower part of the watch connects to our wrist and where the digital crown connects to our other hand when we place the finger leaving the heart in the center.

One can imagine the joy of the Apple Watch health team when they were able to verify that this idea gave the results that have saved so many lives. Thanks to this elegant system, the ECG reaches the widest audience and in the easiest way. We just touch the Apple Watch with our finger and that’s it.

xCloud works fine on Steam Deck, according to Phil Spencer