a remarkable microphone with an eye on PS5

I carry with a microphone Blue Yeti since 2015 and it may be the smartest tech buy I’ve made since. However, the passage of time has not forgotten it and, in addition to a mini USB port that begins to demand more attention than usual when trying to connect it, its design is a hulk that, with the added pop filter, is difficult to integrate into almost any minimally minimalist table.

Knowing that I will continue to use it for podcasts or recordings, the idea of ​​having a lighter and more restrained microphone to have on the table, waiting for a quick call or a game with friends on the PC, was something that I carried time ruminating. And then came the Trust GXT 258W Fyru.

With a box whose weight already seems to indicate what you are facing, open the doors of the GXT 258W Fyru

it is only the prelude to what is to come. Separately we find its legs, the body of the microphone, the universal screw that connects both, and the USB-C to USB connection cable. 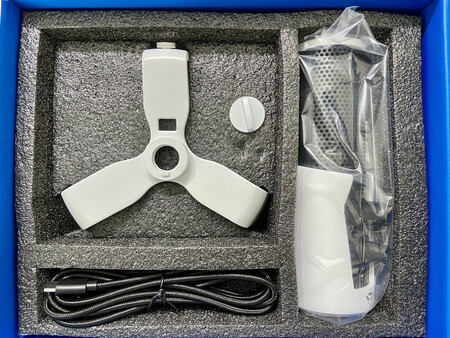 As you take out pieces you begin to notice the weight of each one of them. A collection of metal pieces that immediately generates a pleasant feeling of robustness, anticipating that once you place the mic on the table it will not move from there again.

On its three-legged legs, we find a non-slip rubber at each end and a height regulator on the rear support. The idea is that it is slightly inclined towards your position on the table or, if you prefer because you are going to place it higher, or with someone else on the other side of the room, it can be completely straight.

Even in that last position, where he gains a couple of centimeters, his presence at the table still does not stand out, remaining in a span in front of the span and a half of the Blue Yeti. It’s far easier to integrate it into your desktop without singing too much. 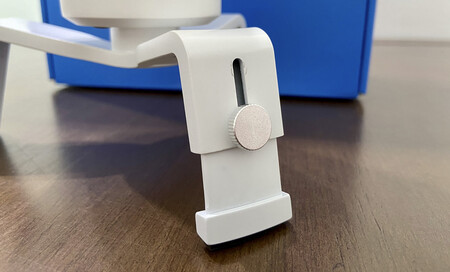 Under the legs we find a hole for the USB-C input port – blessed glory in front of the archaic Mini-USB with which I have to deal every two by three – and a button to control the lights that come out of the middle of the mic. 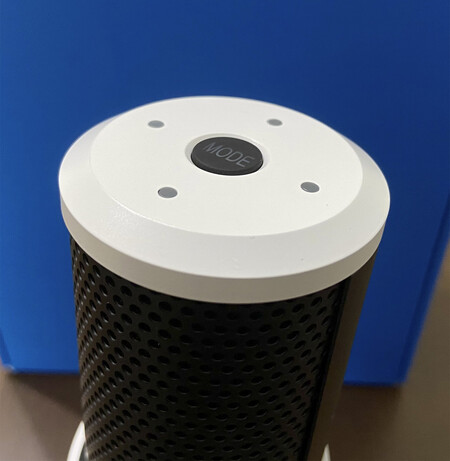 Nothing fair, with breathing lights and millions of colors, just a small number of LEDs that offer five colors to give atmosphere. Six in the case of counting the red color they show when the microphone is muted.

Already in the body of the GXT 258W Fyru we find a lower part guarded by the gain controller, which in turn acts as a mute button when we press it inwards with a useful but very unintuitive solution in the first bars, the volume controller for the headphones and the input jack for the latter.

We go up to continue adding metal to the mix with the microphone with internal pop filter and, already on its crown, the button so that it will allow us to switch between the four sound schemes available, and the four lights that will tell us what mode we are in at that moment.

With no programs to fiddle with or settings to deal with, the GXT 258W Fyru goes to his thing, connect and start working using the upper lights to know at all times which of the four modes you have configured at that moment.

As is usual, these are separated on the front, which is ideal for streaming, podcasting and others, the simulated stereo intended for music recording, the bidirectional focused on on-site interviews, or the omnidirectional when there are several voices and sounds in the room waiting to be captured alike.

As has happened to me in other mics of this style, including the Yeti, the change between one mode and another is not something that you will easily notice, and without an editing program in which to monitor the levels of the function can go quite unnoticed

The important thing is that in all of them the recording is optimal And, although it requires a reasonable distance to be able to get the most out of it -more than I would like even with the maximum gain-, it is an ideal mic for those looking for a remarkable sound and marry more with this style.

For its portability when moving between the PC and the console, the version of the GXT 258W Fyru in order to PS5 it has turned out to be a pleasant surprise in terms of materials, design and functionality.

It may not be the mic I’ll go to when looking for the most professional sound possible when it comes to work, but it’s certainly going to be the ideal choice for everything else. Beyond the closeness that it requires to function, there are no drawbacks in the recording and it is much closer to what sharp that of the metallic sound that some microphones integrated in headphones offer.

Without having to hide it so that it doesn’t eat up too much space on my table, the last mic of Thent is beautiful, elegant and, although it does not neglect that gaming aesthetic of aggressive lights and shapes, it is moderate enough to be an ideal complement to any table that seeks to stand out for its design. 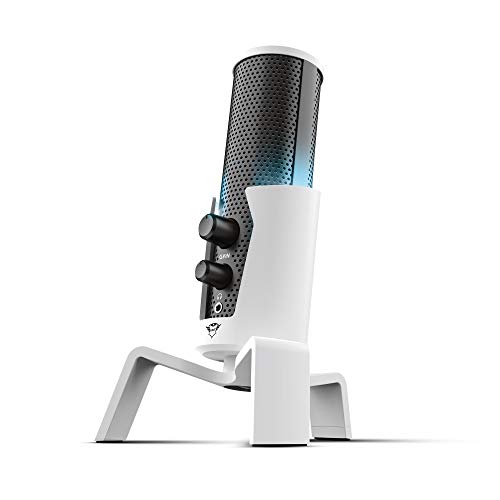 EA announces the development of three games at Respawn